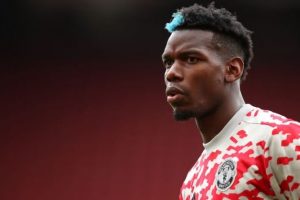 Manchester United midfielder Paul Pogba is now unlikely to sign for PSG this summer after the French side committed millions upon millions to Lionel Messi’s blockbuster two-year deal. The Frenchman’s future had been up in the air this summer, with one year remaining on his current United contract and no sign of a fresh signature in the near future.

PSG had flirted with the idea of tabling a bid for Pogba at various points this summer, but Messi’s extortionate wages are expected to effectively put them out of business for the rest of the window.

With other established stars having joined like Gini Wijnaldum, Sergio Ramos, Achraf Hakimi and Gianluigi Donnarumma, their wage bill is already packed to the rafters.

Pogba has one year left on his United deal and could leave for free next summer, and the Daily Mail claim that he is unlikely to be sold over the next 12 months but could now depart on a free in 2022.

The report also states that Pogba will be a key figure under Ole Gunnar Solskjaer this season.

As for the player himself, he is said to be relaxed about his future and content to spend another season at Old Trafford.

Besides, as long as he does not put pen to paper on a new deal, he will be guaranteed a move away next summer while still in his 20s.

PSG should also be relaxed about the situation, knowing that they are likely to be able to scoop up their midfield target for free in a year’s time.

It would be a blow for United, however, who will have splashed out millions on Pogba’s transfer fee and wages without recouping a fee for losing his talents.

Losing him for free next summer would be yet another financial kick in the teeth.

Keeping hold of Pogba will essentially put an end to their midfielder hunt which had simmered in the background for the past few weeks.

In putting trust in Diogo Dalot, United also seem to have swept their right-back hunt under the carpet, meaning their business this summer may well be done and dusted.

The Red Devils conducted their dealings smart and early, plugging essential holes in the squad by bringing in Raphael Varane and Jadon Sancho.

Getting the very best out of Pogba could have the same impact as another new signing, although Solskjaer may have to tweak his tactics to make that happen.

The 28-year-old often found himself thrust out on the left-wing last campaign, not ideal for the 6ft 3in midfield general, although in a holding role he is landed with too much defensive responsibility.

Still, Solskjaer could have another season to figure that out, with a move to PSG off the cards and a midfielder content to kick on in his United career.