Man Utd include Rice on three-man shortlist of Pogba replacements 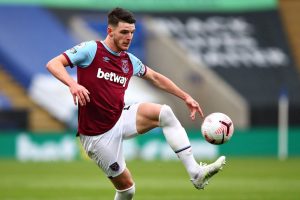 The France international could be on the way out of the club this summer despite his improved form with Mino Raiola looking to get his client away.

The club are looking to open contract talks with the midfielder ahead of the end of the season.

It could see the 28-year-old earn up to £400,000-a-week – but the flipside of the coin, if negotiations fail then Pogba could leave, according to the Mirror.

United are prepared to make the Frenchman their top-paid player but Raiola could prove a problem with the controversial agent potentially threatening to run down his contract.

Paris Saint-Germain and Real Madrid are potential destinations, as are former club Juventus – and plans are already in place to find a replacement.

West Ham star Declan Rice is among those on the shortlist, who has long been admired by those at Old Trafford.

The England international has been linked with a move to Manchester all season and has developed into one of the best defensive midfielders in the Premier League.

However, the 22-year-old is not the only one who the Red Devils are interested in – with Leicester ace Wilfried Ndidi also on the club's wish list.

Atletico Madrid star Saul Niguez, another long-term target at United, is another who Solskjaer would look at if Pogba does leave in the summer.

But plan A is to keep hold of the France international – who has seen his form drastically improve in recent weeks.

Pogba played a starring role against AS Roma in the Europa League on Thursday night as United won 6-2 at Old Trafford.