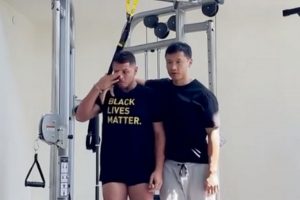 Former Manchester United fan-favourite Javier 'Chicharito' Hernandez was seen bursting into tears during an emotional training session as he recovers from injury.

The 33-year-old currently stars for MLS side LA Galaxy who he joined in 2020, starting his second season with an impressive 10 goals to top the goal-scoring charts.

But he was soon dealt a huge blow when he picked up a calf injury on June 23 while warming-up for his side’s clash against Sporting Kansas City.

And it appeared to be too much for the Mexico international as he shared an Instagram video showing him clearly upset during one of his rehabilitation sessions.

Chicharito has not played a game for over a month since picking up the injury.

He has taken to social media to provide updates and motivational quotes regarding his setback as he looks to return to action as soon as possible.

However, in one of his latest uploads he appears to be finishing a set of pull-ups at the gym before having to be consoled by his trainer.

Hernandez then wipes his eyes and appears to sob as he walks out of the camera shot.

Do you regard Chicharito as a Man United legend? Let us know in the comments section.

It appears the former Man United player of the season purposefully uploaded the video in order to show the difficult aspects of the job while providing motivation to others.

"The decision to continue and continue is in you."

The renowned goal-poacher was signed for United by Alex Ferguson where he won two Premier League trophies.

He left in 2015 before playing for the likes of Bayer Leverkusen, Sevila and West Ham.

Hernandez will hope to return to action soon where he aims to elevate Galaxy from their current third-placed position.