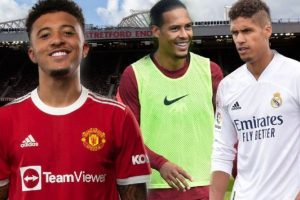 Varane: All you need to know about Man Utd-linked defender

Jadon Sancho is in the building. Manchester United unveiled the winger as their first major addition of the summer transfer window on Friday, welcoming him ‘home’ to Old Trafford after four years in Germany with Borussia Dortmund.

It was a deal long in the making with United long-term admirers of the London-born 21-year-old, who played for neighbours Manchester City before joining Dortmund in 2017.

The 22-cap England international blossomed in the Bundesliga with 50 goals and 64 assists in 137 appearances for Dortmund and United have paid £78million to sign him, only previously paying more for Harry Maguire and Paul Pogba.

But having missed out on Sancho last summer when he was Ole Gunnar Solskjaer’s top target, United have saved themselves £35m – even though having him on board last season might have aided their chances of winning the league.

Dortmund were demanding no less than £108m 12 months ago but have been more willing to do business this year in order to improve their chances of keeping Erling Haaland. Thanks to their healthy financial state, they can now firmly insist the United-linked striker will not leave for anything less than £150m.

United are said to be delighted behind the scenes at how they have saved themselves such a substantial amount of money by staying patient having lost huge sums due to Covid.

And the deal smacks of how rivals Liverpool took their time to acquire Virgil van Dijk, the club-record centre-back who was instrumental in their back-to-back Champions League and Premier League triumphs, from Southampton in 2018.

Solskjaer is hoping Sancho can have a similar influence on his United side, who now have a bonafide world-class right-sided forward, though he can also play on the left or more centrally too.

They remained interested in the attacker for so long because of their belief in his talents, just as Liverpool refused to give up on Van Dijk, and it’s now hoped he can reproduce and then exceed the levels he was producing in Dortmund.

If he does, United have one of the most frightening attacks in world football given they also have Bruno Fernandes, Marcus Rashford, Edinson Cavani, Mason Greenwood and Anthony Martial as other senior options in the final third.

And having followed in the footsteps of Liverpool by playing the long game to sign Sancho, perhaps now United can even recruit their very own Van Dijk in Real Madrid’s Raphael Varane.

After they shipped 44 goals in 38 top-flight games last term, finding a new top-tier partner for captain Harry Maguire is United’s new priority. Varane is the man they want and unsurprisingly so.

The 28-year-old has long been compared to Van Dijk as one of the very best centre-halves in world football, spending the last decade with Real Madrid picking up major honour after major honour (he’s up to 18, in total).

“I’ve been saying alongside Maguire he needs someone with some pace the way Man United play. If you get someone like him, people start thinking, ‘Well we ain’t gonna play the ball over the top cos Varane is gonna eat that up.’ Someone like him, he’ll bring that authority I hope to the back line.”

It was authority and leadership that Van Dijk brought to a previously flimsy Liverpool back-line, which has looked considerably stronger ever since the Dutchman arrived at Anfield. He was named the PFA Players’ Player and Premier League Player of the Year in 2018-19 and was just as key in the title-winning campaign a year later.

Last season, newcomer Ruben Dias was just as important for champions Manchester City last term and was named Premier League Player of the Year, albeit he was surprisingly snubbed for team-mate Kevin De Bruyne for the PFA award.

And now World Cup winner Varane can be similarly transformative as the duo for United’s defence – and help to solve United’s biggest problem by easing the reliance on Maguire to carry the defensive burden.

If he can be half as impactful as Van Dijk, and Sancho can start strongly back in his home country, United have a great shot at downing City even if they land Harry Kane. Firstly though, United must get a deal for Varane over the line.