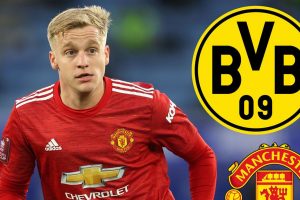 Manchester United are reportedly plotting to use Donny van de Beek as a makeweight as they target some of Borussia Dortmund's stars.

Van de Beek has made just two Premier League appearances since his £40million move from Ajax last summer, with his Old Trafford future under threat.

With Van de Beek having struggled to cement himself in Solskjaer's first-team thinking, his prospects at United look bleak.

But the club are unlikely to recoup the money they paid for him last summer given he has hardly played – and won't want to sell him for a loss.

So club chiefs are weighing up a creative solution which could see them offer the 23-year-old to Dortmund as part of a swap deal for one of the Bundesliga club's stars.

That's according to 90min, which claims Van de Beek could be offered in part exchange for either striker Erling Haaland, winger Jadon Sancho or centre-back Manuel Akanji.

Haaland is believed to be United's top target in the summer transfer window, although they could competition for the centre-forward's signature from Chelsea, Manchester City, Real Madrid and Barcelona.

The Red Devils are still interested in Sancho to solve their right-wing problems after failing to land him last summer, while Akanji.is said to be a target as Solskjaer seeks a centre-back partner for Harry Maguire.

But he was hooked midway through the second half with Fernandes coming on his place, as the Red Devils crashed out of a cup with a 3-1 defeat to the Foxes.

Having struggled to get on the pitch in the Premier League, Van de Beek's best chance to impress may be in next month's Europa League quarter-finals, with United having drawn Spanish underdogs Granada.