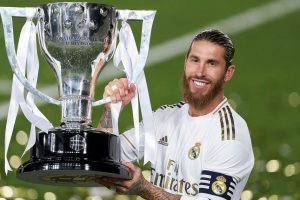 After numerous close calls over the years, Sergio Ramos could finally complete a move to Manchester United following reports the defender is ready to move on from Real Madrid.

Ramos, 35, has entered the final month of his contract at the Santiago Bernabeu, where he’s reigned for 16 years and won just about every accolade available.

AS reported the four-time Champions League winner is hoping the club offers a late extension, having rebuffed their previous approaches in December and March.

Ramos is understood to be seeking a two-year deal (with the option of a third based on performance), but Real president Florentino Perez is only prepared to extend his stay by one.

And although his stance has softened somewhat, Ramos may now be forced to assess his options away from Real after coming to terms with his impending exit, according to the Mirror.

The veteran was the highest earner in Madrid on a reported £312,000 per week, and it’s said Perez’s demands for a 10-per cent reduction were another reason Ramos has failed to extend his terms.

Numerous players at Real have agreed to cut their wages in an effort to help the club’s finances following the coronavirus pandemic.

Do you think Manchester United should sign Sergio Ramos this summer? Let us know in the comments section.

However, there are mixed messages at the club after David Alaba became Real’s new best-paid player, signing a deal worth £400,000 a week following his free transfer from Bayern Munich.

A new centre-back signing is believed to be a chief priority for Ole Gunnar Solskjaer. United’s defence looked out of sorts when Harry Maguire was absent at times this past season, namely in the Europa League final shootout defeat to Villarreal.

Ramos’ defensive partner, Raphael Varane, is another who has been closely associated with the Red Devils, who are said to be willing to offer the Frenchman a salary worth more than £10million.

Real supremo Perez has addressed the club’s financial situation as the Bernabeu enters the final stages of its renovation: "We're in a very tough situation where no one has the money anymore.

"We've got to be realistic. I've never said that he won't stay. At the moment we're completing this season and after that we can see about next year.”

Ramos was restricted to just 21 appearances in all competitions this past season after a string of knee and muscular injuries kept him sidelined for much of the campaign.

It seems a multi-year contract for Ramos isn’t in the works for Los Blancos, who have rehired Carlo Ancelotti as coach following Zinedine Zidane’s exit earlier this summer.

The Spain international—who failed to make Luis Enrique's squad for Euro 2020—is understood to have a good relationship with Ancelotti. However, it seems he won't be around to make an impact during the Italian’s second stint as coach.

United would be one of the few clubs able to afford Ramos’ wage demands and are within reach of a transfer that’s long been just outside their grasp.