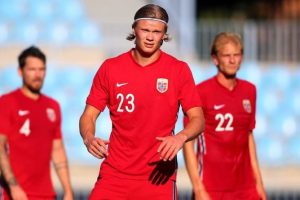 Erling Haaland: All you need to know about the striker

Manchester United might just indirectly swing the Erling Haaland transfer battle back into Chelsea’s favour with their latest purchase. It comes as Real Madrid prepare to lose Raphael Varane this summer.

Chelsea are back in the driving seat to sign Haaland from a financial point of view with Real Madrid stricken by United’s transfer plans.

Ole Gunnar Solskjaer has always maintained that a centre-back is top of the wish list as he looks to partner Harry Maguire with a world-class player.

And even the Norwegian must have pinched himself when it became clear that Varane was not only available but wanted to join.

The Frenchman is among the best defenders in the world and has extreme pedigree having won four Champions League titles and the World Cup, a key player in all of those teams.

It is exactly the kind of signing that United want to make – to the detriment of Real Madrid.

David Alaba has signed on a free transfer but his abilities might be better used at left-back than at centre-back.

It means that Madrid may have to dip into the low funds they have to sign another defender, with Jules Kounde on their wish list.

But Carlo Ancelotti is already struggling to find the cash with club chief Florentino Perez prepared to go over his head to sell fringe players such as Martin Odegaard, Isco and Gareth Bale.

Not doing so will leave Real perilous in their quest to win the big trophies, with them already lagging behind city rivals Atletico Madrid after last season.

Signing Haaland might have to take a backseat as they look to sort their house in order by signing players that they need rather than the ones they covet the most, including Kylian Mbappe.

United’s own transfer plans this summer might leave them out of pocket with Jadon Sancho’s £73m also being added to the pot.

It leaves Chelsea in the clear to make a move for Haaland, who is Thomas Tuchel’s top target.

After 41 goals in all competitions, the Norway international is on everyone’s wish list but his agent, Mino Raiola, is demanding a sizeable chunk while Borussia Dortmund are sticking tho their wild valuations of over £150m.

But if anyone can, it is Chelsea – who are yet to splash the cash but have plenty of money in the bank through player sales and Roman Abramovich.

With United’s latest transfer plot soon to be confirmed, the Blues may never have a better chance to finally sign the striker they want.