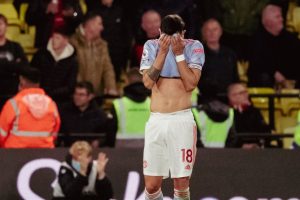 Members of the Manchester United squad were reportedly crying in the dressing room on Saturday following their 4-1 humiliation by Watford, with Ole Gunnar Solskjaer in the firing line.

United were thrashed by Watford and an emergency meeting was scheduled after the game, and it concluded with an agreement that both Solskjaer and the club would part ways.

With Solskjaer on the way out and United being reduced to their fourth defeat in five Premier League games, it was clearly too much for some members of the squad, with Manchester Evening News reporting that certain players were crying in the dressing room.

Their tears won't change anything though, as United have collapsed and Solskjaer has taken the hit.

United returned from the international break knowing that their away trip to Watford was a must win following previous results, but the Hornets humbled the Red Devils as they scored twice in either half.

Pressure on Solskajer was at an all-time high after damning defeats to Liverpool and Manchester City, leaving United with just one win in seven matches.

However, they were swept aside once more and the manner of the defeat was again concerning from a United perspective, who need a miracle to get their season back on track.

Have Your Say! Where will Manchester United finish this season? Let us know in the comments section

Solskjaer may not have got it right this season, but the Norwegian has been let down by his players, and with £73million summer signing Jadon Sancho failing to record a single goal or assist, he has been let down.

Harry Maguire's second half against Watford red carded symbolised the lack of discipline within the squad, and the home punished them and brutally turned the screw as Solskjaer was hung out to dry.

United's turmoil may continue, with an away to Stamford Bridge next up in the Premier League.