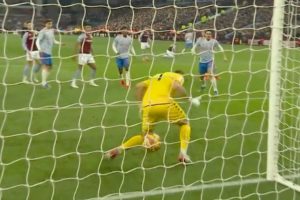 Aston Villa stopper Emiliano Martinez was left with his head in his hands following one of the worst blunders of the season on Saturday evening – to the delight of Manchester United supporters.

The Argentina international failed to deal with a speculative Bruno Fernandes effort during the first-half of their Premier League fixture, despite a lack of accuracy and power.

Martinez spilled the shot through his own legs to the joy of United players and fans, with some of those at home thinking back to a meeting between the two clubs in September.

During that meeting, Fernandes skied a penalty in the closing seconds to hand the visitors a 1-0 win after Kortney Hause had headed home an opener.

After watching the spot-kick clear the bar, the former Arsenal goalkeeper turned to cheer and almost dance in front of the Old Trafford faithful, after telling Fernandes that Cristiano Ronaldo should've been the one to take the penalty.

Martinez said at the time: "I just saw Ronaldo wanted to take it, Bruno took the ball so I thought… hmmm… something’s not adding up here.

"Winning 1-0 at Old Trafford, I had to do something to distract them and I’ve never seen Bruno taking a pen like that in my life.

"They are both great penalty-takers so I had to do something to distract them because that’s how I play."

Will Man Utd finish in the top four? Tell us in the comments section

With a second adding: "Poetic."

A third continued: "I believe they call this ‘karma’."

And a fourth concluding: "Been coming this to Martinez… thinks he's funny taunting people…"

Following the incident, Roy Keane told Sky Sports: "It was a huge mistake from a very good goalkeeper. These things happen – but United started quickly and probably deserve to be in front."

With co-commentator Andy Hinchcliffe saying: "It's an extraordinary mistake, a horrendous mistake.

"It should never have gone through him."

Martinez has proved to be a reliable asset for Villa since his £20million move to Villa, keeping 20 clean sheets across his 57 Premier League appearances.