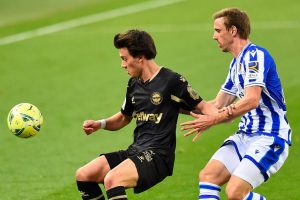 Manchester United fans have reacted to Facundo Pellistri's "impressive" performance for Alaves in his second appearance for the club.

Pellistri, who joined La Liga side Alaves on loan in January, made his debut in the 4-0 defeat to Real Sociedad in February.

But the 19-year-old was given the whole of the second half as Alaves lost 1-0 to Osasuna on Sunday.

And after seeing a highlight reel of his touches in the narrow defeat, fans have been left excited about what is to come from Pellistri.

On a post on the r/reddevils reddit page, one wrote: “Pretty impressed with how confident he seems on the ball. Surely he's in for a start soon.”

“The way he dribbles is pretty unique. Seems to just glide with the ball. Pretty satisfying to watch,” a second added.

While a third put: “Still early days for him but from that he looks to have decent potential. Need to see that consistently and a few goals or assists.”

“I am liking his confidence and composure on the ball,” another chimed in.

As a fifth shared: “Crosses, shooting, physicality, close control are some of the qualities I see that Facundo has and which will only get better.”

Alaves president Alfonso Fernandez de Troconiz explained why he felt his club was the right one to help Pellistri’s development after the loan move was confirmed in January.

"We have full confidence in him and this is why we really fought to get him in on loan," Troconiz told the Daily Mail.

"We really think he can contribute a lot to us.

"We are fully aware he is a young player and he is beginning his European career and he will need to improve.

"But we think we are an ideal team for him to improve with because Alaves is a small club and I think this could favour his improvement.

"We are convinced that he is going to help us have a magnificent second part of the season."