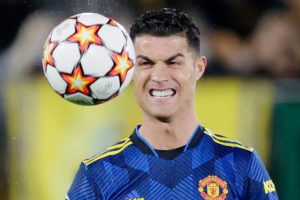 Ronaldo, who usually plays as a central striker, was swapped out for Anthony Martial, who led the line against the Yellow Submarine.

Carrick rang in the changes for his first game in charge of the club, bringing Jadon Sancho, Donny van de Beek and Alex Telles into the side.

While the omission of Bruno Fernandes raised some eyebrows, the real shock was Ronaldo's positioning on the wing – a role he hasn't occupied in a number of years.

Due to his age and somewhat diminishing pace, the five-time Ballon d'Or winner rarely plays out wide anymore, but Carrick chose to put him there and have Martial through the middle.

United fans flooded social media with reaction after kick-off, as it appeared obvious Ronaldo wouldn't be occupying his usual role in the side.

One fan tweeted: "Ronaldo left wing, does Carrick think it's 2008"

A furious United fan tweeted: "F*** me, Ronaldo on the left? Bring back Ole…"

Some fans seemed to agree with the decision, however, as one wrote: "Ronaldo starts on the left wing. Carrick knows ball."

HAVE YOUR SAY! Should Michael Carrick be given the Man Utd job until the end of the season? Let us know in the comments section!

"Ronaldo left wing Carrick I love you," another posted.

One fan declared Ronaldo needs to be dropped by whoever replaces Carrick on either an interim or permanent basis.

The fan tweeted: "Whoever becomes the next Manchester United manager must have the guts to drop Ronaldo but forcing him on the left is just crazy."