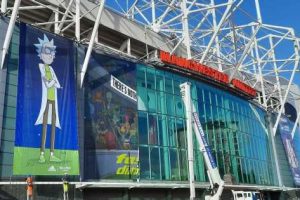 Manchester United fans have been left furious with the Glazers after huge Rick & Morty banners were spotted draped over Old Trafford.

The American owners are hardly in the best books for many United supporters, who have staged protests over the years of their leadership. And fans are fuming after witnessing a major change to their beloved stadium.

A few passerbys who had walked past the famous ground noticed quite a significant change to the usual overlay. Draped across the front was a huge banner advertising the cartoon show Rick & Morty.

And fans have taken shots at the Glazers for the commercial move, with one saying: "Most embarrassing club in the world. Get them lazy snakes out of the club right now. #GlazersOut."

This fan wrote: "@Adidas plaster a cartoon like Rick & Morty all over Old Trafford. This is why we boycott you because you fund the glazers greed."

And another angrily posted: " How have @ManUtd let @adidas plaster a cartoon like Rick & Morty all over Old Trafford. Make it make sense."

While a fourth sarcastically said: "Teams will be shaking in their boots when they play Manchester United for 3 points at the Rick & Morty Arena."

Fans were left bamboozled by the popular cartoon characters making an appearance, though it is likely part of an advertising campaign from Adidas. The animated series have partnered up with the sportswear brand in recent months and have released a new X Speedportal pair of football boots.

Liverpool star Mohamed Salah and Arsenal forward Vivianna Miedema recently starred in a recent animated series of themselves donning the boots, along with the titular characters of the show.