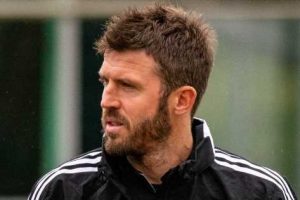 So the axe has finally swung for Ole Gunnar Solskjaer.

After nearly three years at the helm at Old Trafford – far longer than most of us would have ever predicted – the curtain was finally drawn and the Manchester United board pulled the trigger to put the Norwegian out of his misery.

United supporters greeted the news this morning with a mix of relief, frustration and excitement about what's to come, though news of Michael Carrick's appointment as interim manager has – understandably – put some of them on edge.

The situation is eerily similar to the one which landed Solskjaer the job after Jose Mourinho's sacking in 2018, and a number of United fans are worried that Carrick might be handed the job permanently if his interim spell goes well – just like Ole's did.

"Nailed on that Carrick gets the job until the end of the season then gets it full time, gone 18 months later," one fan wrote on Twitter.

Another said: "If you make Carrick full-time or have him until the end of the season there will be no joke bigger than us #GlazersOutNow."

"Carrick is 100% getting the Man U job full time. The Glazers are getting back at the Man U fans for protesting against them," another wrote.

"If we're going down this road it better be only till end of season no matter how good he does, we don't want another Ole scenario," said another.

Solskjaer was finally sacked on Sunday less than 24 hours after being beaten 4-1 by Watford at Vicarage Road.

The United board called an emergency meeting immediately after the game to all but confirm the 48-year-old's departure.

Who will be Man United's next permanent manager? Let us know in the comments section below…

Heavy defeats to Liverpool and Manchester City in recent weeks had left Solskjaer clinging to his job, and after a run of just four wins in 13 matches, the trigger was finally pulled.

Carrick, who worked as a first-team coach under Ole, has been handed the reins on an interim basis as the club mulls over approaches for Zinedine Zidane, Brendan Rodgers, Mauricio Pochettino and Erik ten Haag.