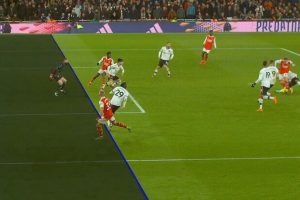 Furious Manchester United fans have claimed the Premier League is rigged after Eddie Nketiah snatched all three points for Arsenal with a contentious late winner.

The Premier League title clash at the Emirates looked to be heading for a 2-2 draw after the two sides cancelled each other out with goals in either half. Marcus Rashford had put United ahead, only for Eddie Nketiah to equalise seven minutes later. Then Bukayo Saka gave Arsenal the lead until Lisandro Martinez headed home to draw things level.

And that's how it looked like finishing – until Nketiah popped up again in added time at the end of the second half. The 23-year-old forward turned home Martin Odegaard's shot from close range to make it 3-2 and seemingly hand Arsenal victory.

However, it wasn't quite as simple as a VAR check kept Gunners fans waiting. With fine margins at play, Nketiah was adjudged to be onside, allowing the goal to stand.

Some United fans still contended that the goal was offside, while others pointed to Oleksandr Zinchenko's role in the build-up that allegedly was not checked by VAR.

Are Arsenal uncatchable at the top of the Premier League? Let us know in the comments section

One wrote: "What?? How the f*** is Zinchenko not offside at the bottom????" While another fan moaned: "I wanna see more angles because Zinchenko looked 100% offside and they just ignored it."

It led to Red Devils fans on Twitter fuming at VAR and the Premier League, with some even claiming that the top-flight is rigged. An irate supporter commented: "The league is rigged f*** off."

While another user commented: "Blatant corruption from the @premierleague. Absolutely rigged." As a fifth United fan chimed in by saying: "Premier League is fixed, enjoy cheating Arsenal."

Despite the baseless protestations of United fans, it was only last week that they got the rub of the green themselves against local rivals Manchester City.

Bruno Fernandes' equaliser was allowed to stand, despite Rashford arguably interfering with play in the build-up. Erik ten Hag's side went on to win that game 2-1 to close the gap to City, who themselves won on Sunday afternoon against Wolves.

United are now 11 points behind the Gunners as their own title ambitions took a hit at the Emirates, while Arsenal are five points clear of the chasing pack after their victory.