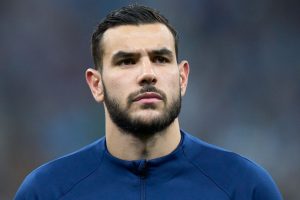 Manchester United are willing to offer two players in exchange for the signature of AC Milan defender Theo Hernandez before the January transfer window slams shut, according to reports. The Red Devils are said to be in the market for additional reinforcements after completing a move for Wout Weghorst earlier this month and have seemingly taken a liking to Hernandez, who featured in all but one of France’s games at the World Cup last year.

Hernandez is also a key player at club level for Milan, who will surely be looking to avoid losing him with just over a week to find a replacement before the January window closes. United have devised a plan to tempt the Italian giants into selling up, though, by offering Diogo Dalot and Anthony Martial in exchange for the 25-year-old.

That’s according to Calciomercato, who claim that United are not yet convinced over the duo’s long-term futures at United and could include them in any offer to buy Hernandez over the next few days. Both players will be out of contract in the summer of 2024 as things stand, leaving the Red Devils with a dilemma to solve over whether to let them go or risk losing them for free next year.

United are still ‘assessing’ whether Dalot and Martial are compatible with the club’s long-term vision or if they would be put to better use as part of a swap deal for Hernandez, who is reportedly valued at around £52million by his current employers. Those in power at Old Trafford are said to be confident that such a proposal would stand a good chance of being accepted by Milan, although it remains to be seen whether they will press ahead with a concrete offer before the end of this month.

JUST IN: Tuchel ‘could go back to Chelsea’ and ‘not interested’ in Spurs job

Dalot has been in and around the United first-team under Ten Hag this season but has recently fallen behind Aaron Wan-Bissaka in the pecking order, with the former Crystal Palace man having enjoyed an impressive run of form over the last few weeks, while Martial has featured regularly since the beginning of the campaign but has sparked a few internal concerns regarding his consistency levels and proneness to injury.

Ten Hag, meanwhile, recently insisted that he will only push for more signings if the opportunities are right for United as a whole, with the Red Devils on the lookout for quality over quantity as they look to prepare themselves for the business end of the season.

“It is always difficult,” said Ten Hag when quizzed on the possibility of improving his squad earlier this month. “Maybe we have to be creative, but we do everything that we have in our power to get it done and get the right player in who fits the balance.

“I don’t think you can judge that and rate it because it is about timing, it is about availability, it is about so many circumstances playing a role.”

The United boss again refused to rule out any further additions when asked about his plans for the rest of the window on Friday, telling reporters: “As Manchester United you always have to look for solutions and always you have to look for better and that is what we will do. We will be doing our research and if there are opportunities we will go for it.”