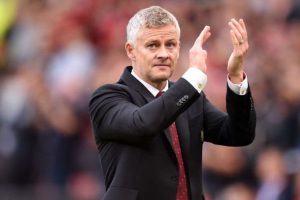 Manchester United are on the lookout for a new manager after sacking Ole Gunnar Solskjaer on Sunday morning. The Norwegian was given his marching orders after the Red Devils were thumped 4-1 by Watford on Saturday.

United have suffered a dismal run of form and have now won just one of their last seven Premier League games.

The team have dropped to seventh in the table and are six points adrift of the Champions League places.

According to The Sunday Times, Man Utd could turn to Sevilla boss Julen Lopetegui to take the helm at Old Trafford.

But club chiefs would have to shell out £4.2million to buy him out of his current contract.

Lopetegui joined Sevilla in 2019 after an ill-fated four-and-a-half month spell at Real Madrid.

The 55-year-old has led Sevilla to back-to-back fourth-placed La Liga finishes and also lifted the Europa League trophy in 2020.

The former goalkeeper previously had a two-year spell in charge of Spain but was famously sacked two days before his country’s first match of the 2018 World Cup after he was named as Real boss.

Lopetegui is just one of the potential candidates United are considering to replace Solskjaer and the Red Devils have now drawn up a shortlist of names in their search for a new boss.

Zinedine Zidane is apparently the club’s preferred option, but the former France international is said to have reservations over moving to Old Trafford midway through the season.

Zidane is currently out of work after leaving Real Madrid at the end of last season but club chiefs could be willing to increase their financial offering to lure the 49-year-old to England.

Man Utd produced another lacklustre display on Saturday as they whimpered to defeat at Vicarage Road.

Joshua King opened the scoring just before the half-hour mark as he converted Emmanuel Dennis’ cross, before Ismaila Sarr added a second before the break after missing an earlier penalty.

Donny van de Beek grabbed a goal for the visitors early in the second period as United looked to launch a comeback.

But the side were dealt a huge blow as Harry Maguire was dismissed after two clumsy fouls.

And Watford heaped more misery on United as Joao Pedro and Dennis scored in stoppage time at the end of the match.

“I’m the manger and I will take the flak and take the responsibility – the players are working as hard as they can,” Solskjaer said before losing his job.