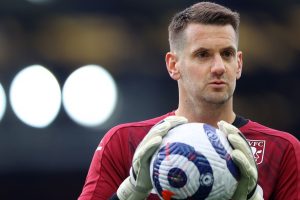 United boss Ole Gunnar Solskjaer is preparing for the exit of De Gea, who has lost his status as No.1 goalkeeper to Dean Henderson and is not prepared to play second fiddle to the England international.

De Gea has become disillusioned with life in Manchester following a difficult season – and would even consider a loan move elsewhere.

The Spanish international will not be short of new offers, with Paris Saint-Germain interested in signing him on a short-term deal.

It has forced Solskjaer to consider his options in terms of luring back-up keeper to Old Trafford.

But news that he is considering a swoop for Heaton will do little to appease fuming supporters who have run out of patience with American owners the Glazers.

Former England international Heaton, now 35, has not made a Premier League appearance for Villa in more than 16 months, despite costing them £8m from Burnley in 2019.

Heaton, though, has been sidelined for a long time with a damaged knee after suffering a cruciate ligament injury.

Solskjaer would prefer to sign West Brom star Sam Johnstone, but the 28-year-old favours a move to West Ham instead.

Johnstone, who came through the ranks at United, knows he will be guaranteed more first-team football with the Hammers than at his former club.

It could leave Solskjaer with no choice but to sign Heaton, who would be content to remain below Henderson in the pecking order.