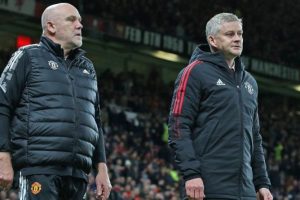 Manchester United coach Mike Phelan wanted Ole Gunnar Solskjaer to sign two Chelsea stars long before the Norwegian’s sacking, reports say. The 48-year-old was relieved of his duties on Sunday following his team’s 4-1 defeat at the hands of Watford. Michael Carrick will now take temporary charge until an interim replacement is identified.

Manchester United went into this season with huge expectations after landing the likes of Jadon Sancho and Raphael Varane, before then adding Cristiano Ronaldo to their squad.

But their campaign has unravelled, leading to Solskjaer to lose his job on Sunday.

The 48-year-old was given the boot just hours after his side had lost 4-1 away at Watford, meaning they’ve lost seven of their last 13 matches across all competitions.

Now, many will wonder what could have been.

Solskjaer, unlike his predecessors, can’t complain that he wasn’t given enough transfer backing.

But The Athletic say Phelan was keen for the Red Devils to raid Chelsea for N’Golo Kante and Callum Hudson-Odoi in August 2019, long before Solskjaer’s departure.

Both players were struggling to win Frank Lampard round at the time.

Kante could have been the perfect partner for Paul Pogba in the middle of the park, with the pair often shining together at international level.

And Hudson-Odoi may have saved United millions on the signing of Sancho.

And United’s loss has been Chelsea’s gain, with the duo helping the Blues win the Champions League under Thomas Tuchel last term.

Some expected Phelan to join Solskjaer out of the exit door.

But he, alongside Kieran McKenna, Richard Hartis and Carrick, will be staying at Old Trafford for the time being.

United go up against Villarreal tonight looking to get their season back on track, with a passage to the Champions League knockout stages on the line.

And Carrick has insisted he’s ready to step up.

When asked about how United will be transformed under him, Carrick said: “We’ll have to see, really.

“Obviously I’ve worked closely with Ole for a long time now and we do have very similar beliefs.

“We did as players and we certainly do as coaches and manager.

“Of course I’ve got my own personality, but it’s very similar, that’s why we worked together for so long and it went so well for a period of time.

“I’m not giving too much away of what my plans are but I’m very clear in my own mind what we want to do.

And Solskjaer has given his old coach a vote of confidence.

“As I’ve said to them this morning as well, trust yourselves, you know we’re better than this,” he told MUTV.

“We’ve not been able to show it but go out, chest out, enjoy being a Man United player, in the Champions League, on the biggest stage.

“If and when you win the game, you’re through to the next round, Michael [Carrick] is going to be in charge.

“Michael, I have the utmost respect [for], I love Michael to bits. I’m becoming emotional now because he’s top.

“They’ll be fine. I’ll watch them and support them.”