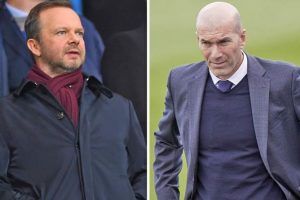 Manchester United supremo Ed Woodward would love Zinedine Zidane to replace Ole Gunnar Solskjaer, according to reports. Solskjaer lost his job on Sunday morning less than 24 hours after his side’s 4-1 defeat to Watford at Vicarage Road. And the Red Devils are now on the lookout for both an interim and permanent replacement.

United were comprehensively outplayed by Watford on Saturday, with the Hornets scoring four times.

And Solskjaer’s sacking was then confirmed less than 24 hours later, with the Red Devils deciding to pull the trigger.

In the short time since, Erik ten Hag and Mauricio Pochettino have been strongly linked with the United job.

But the Independent say Woodward ‘quite likes the idea’ of bringing former Real Madrid boss Zidane to the club.

The 49-year-old is currently available after choosing to quit the Bernabeu for a second time in the summer.

Zidane left Real because he felt undermined by club president Florentino Perez, having missed out on several transfer targets.

Yet while Woodward is an admirer of Zidane, the Frenchman has no interest in moving to the Premier League.

And that’s likely to see United pursue other targets instead.

Laurent Blanc is a frontrunner to take the job on an interim basis, despite currently working in the Middle East with Al-Rayyan.

Then when it comes to permanent replacements for Solskjaer, several are in the frame to take over.

One option is Pochettino, even if his current job at Paris Saint-Germain makes him a tricky appointment.

Ten Hag has admirers within the United boardroom but has indicated he’s happy at Ajax, where he’s been in charge ever since December 2017.

Brendan Rodgers is another, even with Leicester struggling in the Premier League this term.

And interest in Diego Simeone has been put forward, though the combative Argentine seems ‘impossible’ to appoint.

Former West Ham striker Carlton Cole has had his say on who United should hire as a replacement for Solskjaer.

And he’s tipped Rodgers for the role, while also saying he must ‘get rid of Cristiano Ronaldo’.

“Leicester fans are going to hate me for this one but I feel Brendan Rodgers could go in and I feel he would be the right man for the Man United job,” Cole told talkSPORT.

“Get rid of Ronaldo, he’s [Rodgers] going to have to usher him out.

“The reason why, because if you have someone like Brendan he wants to build for the future.

“They’ve got a few prospects in that team that have not even played yet, very good players, and there’s talk of Jude Bellingham coming in as well.

“You’ve got to plan for the future – is Ronaldo the future of Man United?

“He’ll eradicate the players that are not fitting into that formation or system, he has to otherwise he’s going against his own morals.”

United have confirmed Michael Carrick will be in charge until an interim boss is found.

But he won’t have an easy first week at the helm with crunch matches against Villarreal and Chelsea on the horizon.

The Red Devils sorely need to win both matches to start to turn their season around.

And how they fare remains to be seen.