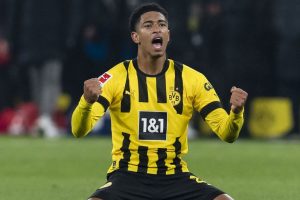 Manchester United can help raise at least £156million to help fund deals for Jude Bellingham, Harry Kane and Axel Didasi by selling six players. Erik ten Hag is desperate to add quality to his squad but will need to sell to raise the funds for new faces with the likes of Harry Maguire, Scott McTominay and Jadon Sancho potentially in the firing line.

The Red Devils spent over £200m in the summer as they made six additions including Casemiro, Lisandro Martinez and Antony. It was more than Ten Hag initially intended to spend in his first window at the club but he deemed it to be necessary after working with the squad for the first time.

However, the expenditure has left the club in a tricky position this year with a need to stay within the boundaries of financial fair play regulations. The club could soon be subject of a takeover with new owners likely to make funds available but it is not likely to ease the FFP concerns. As a result, player sales may be necessary to help fund future moves in the next six months.

United have been credited with an interest in a host of players as they look to improve their on-field chances. Bellingham, Kane and Didasi have been among the names most heavily linked but all come with considerable transfer fees.

Borussia Dortmund are believed to be holding out for at least £130m for Bellingham while Kane will not accept anything less than £85m for their talisman despite his contract expiring in just 18 months’ time. Didasi has also been quoted at £22m meaning their combined cost could be at least £237m.

If United are serious about bringing the trio to the club then player sales are an inevitability and six could find their time at the club cut short. Harry Maguire, Scott McTominay, Jadon Sancho, Victor Lindelof, Aaron Wan-Bissaka and Anthony Elanga have all found their game time limited this season and as such could be candidates for a move.

The amount the Red Devils could raise from the sextet is substantial according to the football database Transfermarkt. The website values the players at £156m combined in what would be a huge boost to the club’s finances which may help in the quest to add to the squad.

Sancho holds the most value with the site suggesting he is currently worth £53m in the current market with Maguire and McTominay following at £26m. Elanga is next on £22m with Wan-Bissaka at £16m and Lindelof at £13m still contributing considerable amounts.

It remains to be seen whether or not United will pursue this approach but it is interesting to see the value the club currently holds in the players already at the club.