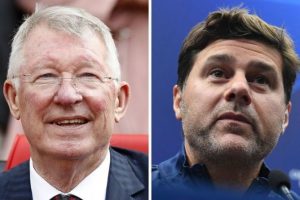 Manchester United could reap the rewards of calling on Sir Alex Ferguson in their efforts to appoint Mauricio Pochettino as their next permanent manager. The Paris Saint-Germain boss has reportedly been earmarked as United’s priority target to replace Ole Gunnar Solskjaer, who was relieved of his duties last week.

United are said to have already seen an initial approach for Pochettino rejected by PSG, who are determined to avoid letting their manager leave in the middle of the season.

The Red Devils have now switched their focus to the appointment of an interim boss until the end of the campaign, with a handful of names believed to be in the frame for the role.

However, Pochettino is believed to be open to the idea of managing United and there seems to be a belief that a deal could be done in the summer.

The Argentine coach remains under contract at PSG until the summer of 2023 and the Red Devils are going to need to stump up the cash in order to rubber-stamp his signature.

It has recently been suggested that he will not be allowed to leave unless the French giants receive around £10million in compensation.

United appear to be facing a tricky task in winning PSG over, but they could always decide to unleash Ferguson, who might have the ability to play a crucial role in deciding Pochettino’s fate.

The legendary former United boss is still very much involved in proceedings behind closed doors and was the club’s secret weapon in convincing Cristiano Ronaldo to return to Old Trafford in the summer transfer window.

The five-time Ballon d’Or winner looked set to join Manchester City in a surprise turn of events before Ferguson reportedly stepped in and saved the day at the eleventh hour with a simple phone call.

Conveniently enough, he also enjoys a close relationship with PSG chairman Nasser Al-Khelaifi, according to The Athletic.

The pair reportedly met at the Lowry hotel in Manchester earlier this year for a catch-up, with Al-Khelaifi publicly expressing his admiration for the United hero shortly afterwards.

“Sir Alex Ferguson created one of the greatest teams in the world, but his charisma was and still is incredible,” the PSG chief told France Football.

“Even today, when he enters into a stadium, there is a thrill running through the stands, you can feel it.”

It remains to be seen whether Ferguson will be involved in testing PSG’s resolve if United decide to make a new approach for Pochettino ahead of next season.

The 79-year-old stepped down as United manager back in 2013 and directly influenced the appointment of David Moyes as his immediate successor in the dugout.

It seems as though it would represent a missed opportunity for the Red Devils to avoid using Ferguson’s relationship with Al-Khelaifi in any bid to land Pochettino.

United have endured a steady decline in the years since Ferguson’s initial exit and their next appointment will be crucial in shaping the club’s trajectory over the next few years at least.

And if they are serious about Pochettino, they will benefit from all the help they can get in their efforts to secure his services.