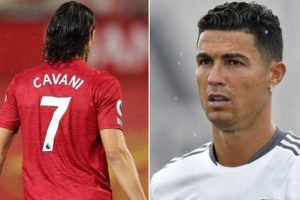 Manchester United could hand Cristiano Ronaldo the shirt number he wanted when joined the club the first time around way back in 2003, given the iconic No 7 jersey is taken by Edinson Cavani.

The Red Devils confirmed on Friday night that Ronaldo will return to Old Trafford subject to the agreement of personal terms, a visa and a successful medical, none of which are expected to be a problem.

The five-time Ballon d’Or winner will rejoin the club 12 years after departing for Real Madrid, having scored 118 goals in 292 games across six years in his previous spell.

United’s statement insisted that ‘everyone at the club looks forward to welcoming Cristiano back to Manchester’ but refused to reveal what shirt number the Portugal captain will take at the club.

The Daily Mail reported last month that Ole Gunnar Solskjaer declined to ask Cavani to vacate his number for another summer signing, Jadon Sancho, who was eager to take it upon joining from Borussia Dortmund.

They claimed the delay in the announcement of Sancho’s arrival was because he wanted the No 7, previously also worn by Eric Cantona, George Best and David Beckham as Ronaldo.

And Solskjaer may too refuse to ask Cavani for Ronaldo given the Manchester Evening News report that the Uruguayan remains in his plans.

Asking him to give up his shirt could well be seen by the player as a demotion and Solskjaer will be keen to keep the 34-year-old South American motivated to battle for the centre-forward spot with Ronaldo and Anthony Martial.

Ronaldo may not even be able to claim the No 7 anyway. It is thought he would require special dispensation from the Premier League to take it.

That is because the rules state that Cavani, who is already registered with the No 7 strip, must leave for Ronaldo to take it.

That or his new team-mate must receive permission from the league’s board, which has never previously allowed such a change.

Sky Sports’ Dharmesh Sheth explained: “United would need to come up with a really good reason why Cristiano Ronaldo should have that No 7 shirt.

“As it stands, you’d have to say that unless Edinson Cavani leaves Man United in the coming days, which we’re not expecting to happen, then Cristiano Ronaldo is unlikely to be wearing the No 7 after returning.”

That’s the No 28, which Ronaldo has said he wanted to take back in 2003 when he first joined the Red Devils under Sir Alex Ferguson.

He said in 2017 that Ferguson wanted him to have the No 7 shirt instead, explaining as per ESPN: “I was surprised because I knew of all the great players who had worn that jersey. It was the start of my successful stage in football.”

The Portuguese would of course go on to make the iconic number his own, lifting three Premier League titles and the Champions League with United as well as countless individual accolades including his first Ballon d’Or in 2008.

The No 28 has meanwhile been warn by Mark Lynch, Gerard Pique, Darron Gibson, Alexander Buttner, Anderson, Morgan Schneiderlin, Angel Gomes and most recently Facundo Pellistri, who has been sent out on loan to Deportivo Alaves.

But if Cavani keeps the No 7 shirt, perhaps Ronaldo will roll back the years and take the No 28 instead.

That was the jersey he wore in his debut season, the 2002-03 campaign, as a professional with Sporting Lisbon. He joined United the summer after and has worn the No 7 almost every season since, becoming known as ‘CR7’ in the process.

The only year he didn’t wear it was his first year at Real Madrid, in which he took the No 9 before switching to No 7 after Raul left to join Schalke.

And if he cannot maintain his reclaim his old jersey, perhaps he might take the one denied to him by Ferguson, even if CR28 isn’t quite as catchy as his iconic current moniker.