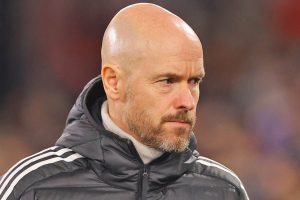 Unfortunately for Manchester United, Anthony Martial will be missing for Sunday’s clash with Arsenal. And though the France international still divides opinion, that represents a hammer blow for Erik ten Hag and his side. The Red Devils need everybody possible to stop the Gunners – who have lost just once in the league so far this term.

Manchester United will also be without Diogo Dalot for the match in north London, with the Portugal international still struggling for fitness.

However, it’s Martial who is arguably their biggest loss.

Many were expecting the France international to be sold back in the summer, having struggled under both Ole Gunnar Solskjaer and Ralf Rangnick.

Martial also spent the second half of last season on loan at Sevilla but, typically, injuries prevented him from ever realising his potential.

When he’s been given a chance for United this campaign, however, he’s usually taken it.

With five goals and two assists to his name, from just 13 appearances across all competitions, he’s certainly silenced his critics.

United, historically, have beaten Arsenal by playing on the counter-attack. Especially away from home.

Martial’s absence, therefore, will be felt. His speed gives them a potency that Wout Weghorst, for all of his physical attributes, lacks.

When United bruised Arsenal under Sir Alex Ferguson in 2009 and 2010, they played with speedsters at the tip of their attack.

Cristiano Ronaldo, Wayne Rooney and Nani’s soaring pace benefitted the side and Arsenal could never cope with that.

There’s a sense that, if Martial was available for today’s game at the Emirates, Ten Hag would do similar.

A front three of himself, Antony and Marcus Rashford would be hard for Arsenal to stop – regardless of how much defensive improvement they’ve made.

But with Martial missing, that gives Ten Hag a selection dilemma.

Does he play Weghorst up top? The Netherlands international did well enough against Crystal Palace on Wednesday but will need to do better to see his loan move turned into a permanent one.

United could also feasibly play Rashford and Antony as wide forwards, with a midfield of Bruno Fernandes, Scott McTominay, Christian Eriksen and Fred.

Or they could even switch to a back five to contain the threat of Arsenal.

United, in an ideal world, would have a fully fit and firing Martial at their disposal.

Yet injuries continue to hamper the 27-year-old and he’s now missing more games than he’s playing in.

Speaking ahead of the Arsenal game, meanwhile, Ten Hag expressed a belief his side were getting better and better with each passing game.

“All I want to bring in is a culture for high standards and values, and also accountability and transparency and honesty are the kind of values I want to set, I want to control,” he said.

“That is the way we have to co-operate internally but also externally, so with the media and the fans.

“The Premier League at this moment develops and you have six or seven teams who can all finally win the league, because there are so many investments.

“And when you have the right philosophy, the right strategy, many more clubs can compete for positions, for the top positions in the league.

“So that’s a great challenge and if you want to be there you have to be really good, you need that consistency, that good strategy and you need hard work to compete there.

“And if you want to win trophies, everything has to go in the right way.

“I’m quite confident of that process.

“We are in the right direction, so it also means that we have to improve a lot if you want to compete in the future for the top positions, because the competition will be really tough.”