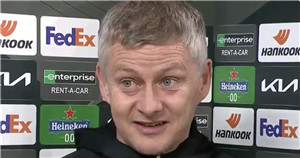 Manchester United could be forced to take on Chelsea without several first-team stars as Ole Gunnar Solskjaer considers his options.

The Red Devils cruised into the last 16 of the Europa League with a 4-0 aggregate win over Real Sociedad on Thursday – after which Solskjaer updated supporters on his injury woes.

Although both Bruno Fernandes and Marcus Rashford managed 45 minutes at Old Trafford, each of Scott McTominay, Edinson Cavani and Donny van de Beek are not fully fit.

In addition, the Norwegian has offered an update on Paul Pogba, who hasn’t featured in the Premier League since the draw against Everton in early February.

Solskjaer revealed that while he has hope that McTominay, Van de Beek and Cavani could return against Chelsea, Pogba will not be back for a few weeks.

He told BT Sport: "(Dan James) We will have to check on him tonight. Scott, Donny, Edinson we hope they can be available for the weekend. Paul is still out for a few weeks."

Before adding: "We are a group that are very tight together.

“You come in, your work every day, you have a few setbacks and knocks. We want to go further but when you have failed before you want to do better.

“The culture is really improving and we've got some fantastic players and fantastic coaches.

"Now until the international break, I think we have six or seven games – we have Chelsea, Leicester and West Ham – all important games, so these three weeks now are going to be massive for us.

“But confidence is good and hopefully we will get a few players back in."

Solskjaer was also left impressed by the performance of youngster Shola Shoretire, who has had a glimpse of life in the first-team since turing 17.

He said: "Shola has got some skills, he's going to make a very good player here.

“It's a platform tonight, just 15 minutes but it's something to remember for him at Old Trafford. Maybe he would've enjoyed it more with fans because they give you so much energy.

“But I'm sure all the fans will see him soon."