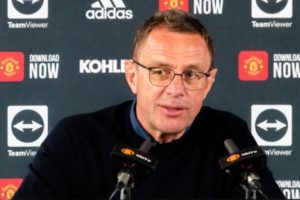 Ralf Rangnick has apologised to Manchester United fans after his side were thrashed 4-0 away to Brighton. “It was a terrible performance,” he said. “From the first until the last minute it was not enough; we can only apologise for this performance and a humiliating defeat. [Monday’s win over Brentford] was a different game, we just gave too much time and space.

Rangnick acknowledged where his side’s problems lie and claimed to have told the squad how to solve it – by being compact. Those orders were not fulfilled as United’s faint Champions League hopes were obliterated.

He added: “We were never in a position where we could stop them playing through our lines, We told the players be as compact as they could but we couldn’t stop it. I don’t think they ignored the gameplan but we weren’t able to stop them. We gave them too much space and if you do that against a technically good team like Brighton, you will get punished.

“It is not a question of individual quality. We showed that in other games, when we beat Tottenham and West Ham at home and Leeds away. It is a problem of energy and defending as a team. We need to show a different face in the final game because we will need one or three points to make sure we qualify for the Europa League. At times today it looked like we were on the summer break and that is what we need to make up for against Crystal Palace.”

Moises Caiceda opened the scoring for Brighton on the 15th minute but United’s collapse did not come until the second half.

Marc Cucurella thundered in a second for the hosts four minutes after the break and then the floodgates opened. Pascal Gross finished off a tidy move before Brighton hit a third in 11 minutes when Leandro Trossard bundled the ball over the line.

**We’ll be bringing you the very latest updates, pictures, and video on this breaking news story.