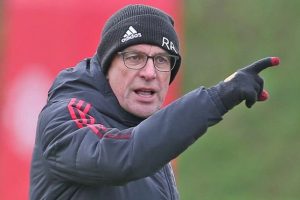 Manchester United go into Monday evening’s FA Cup clash with Aston Villa looking to prove a point. It’s been a dire season so far, with the club struggling under both Ole Gunnar Solskjaer and Ralf Rangnick. Defeat at home, in a competition which still means so much, would represent catastrophe.

United thought results and performances would both improve under Rangnick following their decision to sack Solskjaer at the end of November.

Yet while they started life under the 63-year-old with victories over Crystal Palace and Norwich, they still appear disjoined.

United saw their season stoop to a new low under Rangnick last Monday when Wolves beat them 1-0 at Old Trafford courtesy of a late strike from veteran Joao Moutinho.

Now, they’ll lock horns with Aston Villa looking to progress to the fourth round of the FA Cup.

If United need motivating, they need only look at Steven Gerrard in the opposite dugout.

The former midfielder enjoyed a glittering spell at Liverpool, often scoring against and hurting the Red Devils in the process.

But United can’t rely on just that to emerge victorious. Instead, they need all of their players operating at the peak of their powers to reign supreme.

So, with that being the case, Rangnick should be brave and take three players who started the Wolves defeat out of his side.

The first is Aaron Wan-Bissaka.

Solskjaer signed the right-back from Crystal Palace back in the summer transfer window of 2019, believing he’d be a substantial hit.

While Wan-Bissaka has often been good defensively, however, he leaves plenty to be desired from an attacking perspective.

And given he’s dropped off alarmingly, it’s time for Rangnick to reinstate Diogo Dalot to the side.

Dalot doesn’t always convince defensively but, when it comes to going forward, the Portugal international represents a substantial upgrade.

Therefore, Rangnick should gamble by going with the former Porto star – especially at a time where Wan-Bissaka has become such a liability.

A second player who the German needs to take out of his side is Nemanja Matic.

United look lethargic in the middle of the park and especially so when the former Chelsea star is unleashed.

Matic was once one of the best defensive midfielders in world football but, as he enters the twilight years of his career, those days are over.

The Serb lacks the speed and intensity to become an undroppable and it’s time for Fred to be put back into the team instead.

As well as Matic, Jadon Sancho is another problem player at the current moment in time.

Solskjaer spent three years pursuing the former Borussia Dortmund star, with the club’s own interest dating back to when Jose Mourinho ruled the roost.

Yet Sancho, so far, hasn’t proven to be worth the wait.

The England international has scored just once in the Premier League this season and twice across all competitions.

For a forward who cost in the region of £73million, that simply isn’t good enough.

And given Sancho’s selection has seen Bruno Fernandes demoted to the bench, the Portuguese playmaker deserves to come back into the side.

Fernandes, like many of his team-mates, has suffered a dip in form since Cristiano Ronaldo’s Hollywood homecoming back in the summer.

However, the former Sporting Lisbon star is worth sticking with. When he’s on top form, he’s one of the best players on the planet.

Meanwhile, speaking ahead of the game with Villa, Rangnick spoke out on what the FA Cup meant to him.

“When I was a young student at Stuttgart University, I spent the year, as you know, in England, in Brighton, as a guest student at Sussex University,” he said.

“I played at the same time as a player for a small Sunday League team, Southwick, and their farewell gift when I left back for Germany at the end of that year was a ticket for the Cup final at Wembley: West Ham against Arsenal.

“I think it was 1980 or 1981. I very much relish that experience still if I think about the atmosphere there.

“There were 30,000 West Ham and 30,000 Arsenal supporters, they had prepared individual songs for each individual player. ‘There’s only one Liam Brady,’ I remember, for example.

“So, they had a special song for each player; each player, when this song was sung by supporters, was just standing in that corner where the supporters were.

“It was a very special atmosphere and, as I said, it was obviously the old Wembley stadium and, of course, it would be great for us to experience that atmosphere in May, or whenever the Cup final is being played.”