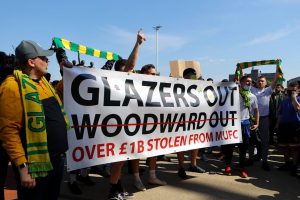 Manchester United are reported to have "increased security measures" to control any further protests at their training facilities in Carrington.

Last week, a number of fans blocked entrances and held banners in a rally against the Glazer family ownership after their involvement in proposals for a European Super League that eventually collapsed.

Police were called to the grounds but no arrests were made.

The outraged fans spoke with United boss Ole Gunnar Solskjaer before protests continued before the 0-0 draw against Leeds United at Elland Road.

Fans wearing green and gold scarves set off flares in a similar demonstration when the unpopular Glazers took over in 2005.

One sign carried by fans this time read: "Glazers out, Woodward out, after £1bn stolen from MUFC", while another sign read: "United against greed".

Further protests are arranged for United's next home game against Liverpool on Sunday.

Manchester United have refused to comment on extra security measures but Sky Sports News understands they have been described as "appropriate" and have "now been implemented."

The European Super League proposals included a 'closed shop' structure where 12 elite clubs would compete against each other with guaranteed income of £300million each from investment bank JP Morgan.

All six English clubs involved including both Manchester sides, Liverpool, Chelsea, Arsenal and Tottenham Hotspur backtracked and pulled out within 48 hours.

Former Manchester United defender and Sky pundit Gary Neville raged against this idea but he has warned it is far from over.

"The scary thing is that these people( the 12 clubs owners) are regrouping back at base," Neville said.

"They are not going away. There has to be legislation passed through government. The government are the only people who can stop this."

READ MORE: Hall of Fame’s 23-man shortlist as fans decide on next six after Shearer and Henry