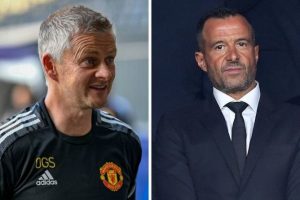 Manchester United reportedly asked Jorge Mendes about Barcelona wonderkid Ansu Fati during talks to re-sign club icon Cristiano Ronaldo. The Red Devils are now expected to capitalise on the good relations that have been rebuilt with the super-agent following the completion of the deal that saw has seen CR7 return to Old Trafford, 12 years on from his departure to Real Madrid.

United have not always seen eye-to-eye with Mendes in recent times, most notably when Jose Mourinho and David de Gea were concerned.

The Special One was axed by the United hierarchy in December 2018 before Mendes and De Gea eventually ended up falling out over contract talks at the club.

Yet the return of Ronaldo has brought the two parties closer together once again and as Wolves know well, ‘Uncle Jorge’ is worth keeping in your corner.

According to reports in Mundo Deportivo, Barcelona youngster Fati’s name was mentioned in talks over Ronaldo between both Manchester clubs and Mendes.

Barcelona are said to consider him non-transferable, particularly now Lionel Messi and Antoine Griezmann have departed the club.

The Spaniard’s current deal is up next summer but Fati is expected to extend with Barca.

He has already been given Messi’s No 10 shirt following his move to Paris Saint-Germain.

Although talks are ongoing, Barcelona are understood to be giving Fati space to complete his recovery from injury.

City were said to be genuine about bringing him to the Etihad Stadium but so far, all indications suggest he will be staying at Barcelona.

As for United, Ole Gunnar Solskjaer’s side is now stacked with quality in attack.

That was emphasised last Saturday in the 4-1 win over Newcastle when Cristiano Ronaldo and co. ran riot.

Even still, Anthony Martial and Jesse Lingard were on the bench while Edinson Cavani and Marcus Rashford were not even fit enough to make the squad.

The Uruguayan and Lingard’s contracts are currently up next summer though, meaning there could be movement in attack.

United were reportedly close to wrapping up a deal worth £133million to sign Fati last year before Barcelona blocked the deal.

It was claimed last November in the Catalan press that Mendes had brokered a deal that would have seen Fati moved to Old Trafford before Barcelona put the breaks on the move.