Man Utd, Arsenal and Chelsea may strike transfer bargains as ‘Real put squad up for sale’ 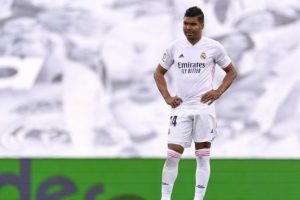 Real Madrid could be set for a complete overhaul of their squad this summer with reports from Spain suggesting all but five of their first-team stars could be allowed to leave. New Real boss Carlo Ancelotti is looking to put his stamp on the Spanish giants, who missed out on the La Liga title by two points last time out.

With a number of ageing players amongst his ranks, Ancelotti knows he needs some new faces at the club.

And, according to Marca, players will need to leave to make room for the new additions.

In fact, only David Alaba, Thibaut Courtois, Karim Benzema, Fede Valverde and Vinicius are off limits.

That news will have piqued the interest of the Premier League big boys, who are desperately trying to finalise their own squads ahead of this month’s transfer deadline.

Manchester United, Arsenal and Chelsea are all in the hunt for new signings, so which Real players might be making their way to England?

Casemiro, who has four Champions League trophies to his name, was apparently a transfer target for Man Utd in 2018 when Jose Mourinho was at the helm.

A move for the Brazilian would provide United with a truly world-class defensive midfielder to protect their backline and give the side’s attacking players freedom to do their thing.

Fellow Brazilian Marcelo, who has also lifted the Champions League four times, is viewed as one of the finest left-backs of all-time.

He’s known for his attacking flair and big personality and would certainly be a welcomed addition to the Premier League.

Man Utd would love to get their hands on the player but, at 33-years-old, how long would he be able to deal with the pace in England?

Gareth Bale clearly had no role to play at the Bernabeu under Ancelotti’s predecessor Zinedine Zidane – and the new boss appears to be in no hurry to keep him either.

Bale returned to Tottenham on loan last term and came to life towards the end of the season. But Spurs didn’t break the bank to keep him permanently.

The Wales international has been linked with Man Utd in the past. But is he the sort of flair player who Chelsea could do with to unlock opposition defences? He might even be the goalscorer the Blues are desperately looking for.

Eden Hazard enjoyed seven years at Stamford Bridge and was a pivotal player as he lifted the Premier League trophy twice.

Hazard has struggled with injuries since moving to the Bernabeu, making just 43 appearances during two seasons in Spain, and a return to Stamford Bridge may work for all parties.

Blues fans would certainly love to see him back at the club.

Dani Ceballos has already had a two-year loan spell with Arsenal, racking up 49 Premier League appearances in that time.

The midfielder didn’t exactly light the top flight up though and it’s unlikely he will be returning to England, with AC Milan rumoured to be interested in signing him.

One player who Arsenal boss Mikel Arteta would love to have back at Emirates Stadium is Martin Odegaard.

The Norwegian midfielder spent the second half of last season on loan at the club and certainly added something to the side.

Real would be willing to let him go for around £42million apparently – so it remains to be seen whether Arteta sees that as a price worth paying.