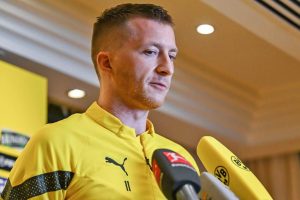 Manchester United are, according to reports, eyeing Marco Reus. The Borussia Dortmund star is poised to become a free agent at the end of the campaign, when his contract is due to expire. And Erik ten Hag has reportedly held talks with the 33-year-old’s agent as he eyes a surprise move over at Old Trafford.

And it’s since been claimed the Red Devils talked with the representative about a potential deal for his client at the end of the season.

Ten Hag is reportedly open to having Reus on board, despite the Germany international being plagued with injuries over the years.

The 33-year-old would be a good option to have in attack, having produced consistent statistics when fully fit and firing.

And what bodes well for United are recent comments from Hebel, where he admitted Reus was open to leaving the Westfalenstadion.

Hebel effectively invited offers for his player by saying: “It is quite normal that other clubs are interested in a player like Marco, whose contract expires in six months.

“Marco has always emphasised how much BVB is close to his heart, but also that he wants to continue playing football.

“So it’s only natural that we have to look at other options.”

United would be able to offer Reus the chance of play in the Premier League.

And they’ve also been linked with the veteran many times over the years, too, meaning they’ve likely done their homework on the player.

Sir Alex Ferguson was an admirer of Reus before he left Old Trafford, having eyed the forward when he was strutting his stuff for Borussia Monchengladbach.

Louis van Gaal eyed Reus, along with his Dortmund team-mate Mats Hummels, during his time in the dugout.

And though links were less constant under Jose Mourinho, they still surfaced nonetheless.

United, should they land Reus without paying a fee, will be signing a second free agent in as many years.

They recruited Christian Eriksen from Brentford last summer after his short-term contract at the Gtech Community Stadium expired.

And whether Reus does end up moving to Manchester remains to be seen.

The player himself recently opened up on his situation at Dortmund and admitted he was leaving things to his agent to sort.

“That’s what I have an agent for – to take care of these things agent,” he said.

“Of course you look ahead. I still have half a year left on my contract, I have to think about it.

“We will have talks and see in which direction it goes. We’ll see what the future brings.”

Reus could become the third player to leave Dortmund for United over the past decade.

They raided the German giants for Henrikh Mkhitaran in 2016, with the Armenia international firing them to Europa League glory the following year.

And, in 2021, United recruited Jadon Sancho after agreeing to cough up a huge £73million.