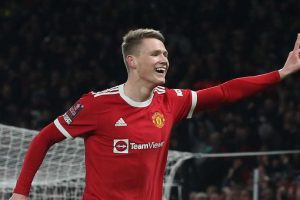 Interim manager Ralf Rangnick tipped Scott McTominay to one day don the captain’s armband for Manchester United after the midfielder led his side to FA Cup third round victory over Aston Villa on Monday.

The Scotland international scored the only goal of the game at Old Trafford and his second in the last three matches with a fine header that eluded the grasp of Emiliano Martinez eight minutes in. United went on to win 1-0 and progress to the fourth round of the competition.

Villa then had the ball in the net twice in the second half, but saw both efforts ruled out. The two sides will meet again in Premier League play this weekend.

What did Rangnick say about McTominay?

“He is an academy boy, his energy is amazing,” Rangnick told BBC Sport when asked about United’s midfielder. “He now also starts scoring goals and also with some leadership skills. I wouldn’t be surprised if in a couple of years he would be the captain of this team.”

McTominay had also done his part in their previous victory, providing a spectacular opening goal in their 3-1 win over Burnley at the end of December. He was named Man of the Match by FotMob with a rating of 8.8, ripping off four shots with three of them on target, while also contributing three tackles, two aerial duels, and five ball recoveries.

His goal came on a headed finish of a spectacular cross by Fred who delivered a curling ball into the box from a great distance outside the top-right corner of the box. The midfield duo has been nicknamed “McFred” by the Manchester United faithful, and the combination came up big to advance United through to the FA Cup fourth round.

Rangnick also had warm words for goalkeeper David de Gea, who kept Villa at bay late on with a string of fine stops.

“We have to develop the team into a clean sheet team and that was another one today, but still David de Gea was outstanding again for me today,” he added. “I would have wanted him to have less saves in total, I think we had four or five shots on goal, but again we can still improve even in that area.”

The Red Devils were, however, saved some embarrassment by a critical VAR decision that resulted in a goal by Aston Villa striker Danny Ings chalked off thanks to a funky offside decision against Jacob Ramsey.