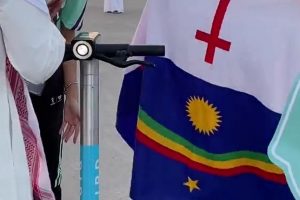 A Brazilian journalist has revealed he was stopped by Qarati police when they believed he was carrying an LGBTQ+ flag.

Victor Pereira shared a video on Twitter explaining how Qatari police had confiscated his Pernambuco flag – a state in northeast Brazil. He said: "We were approached because of the flag of Pernambuco, which has a rainbow, and they thought it was the LGBT flag.

"They took my cell phone and only gave it back to me when I deleted the video I had." The Pernambuco flag features a rainbow on it, however, it symbolises the beginning of a new period.

READ MORE: Meet Argentina's sexiest fan at World Cup who once auctioned off her lucky knickers

Pereira added: "They even picked up the flag of Pernambuco, threw it on the ground and stepped on it. When some people intervened and softened the situation.

"The video in which I recorded what they did to the flag was mandatory to delete!" Qatar have cracked down on the visibility of rainbows during the World Cup, and a group of Welsh fans were asked to remove their rainbow bucket hats on Tuesday evening.

While a US journalist from the same clash was asked to remove his rainbow t-shirt, or he wouldn't be allowed entry.

What do you think of the flag being confiscated? Let us know in the comments section

He said: "Our solidarity with the Pernambuco journalist Victor Pereira. Victor is covering the Qatar Cup and had the flag of Pernambuco that he carried seized by the authorities of that country."