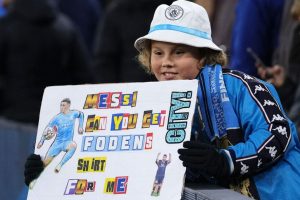 Phil Foden is on the lookout for a young Manchester City fan who poked fun at PSG star Lionel Messi by asking for the England international's Champions League shirt.

The fan brought a homemade sign to the Etihad in the hope they would leave with Foden's matchworn Number 47 shirt, and would've been devastated to learn that their hero wasn't playing a part.

The 21-year-old was deemed not fit to start the European encounter which Pep Guardiola's side would go on to win 2-1.

Despite not being involved, Foden spotted the sign on the television coverage, and has asked for help from social media to locate the fan with the memorable request.

The young spectator's sign asked if Messi could 'get Phil Foden's shirt for me'.

Foden wrote, with a laughing emoji: "Thanks for the support.. does anyone know this young fan??"

Raheem Sterling and Gabriel Jesus were both on target following Kylian Mbappe's opening goal, seeing City safely through to the last 16 of the competition.

Will Phil Foden win the Ballon d'Or during his career? Tell us in the comments section

Zinchenko played in midfield alongside Rodri and Ilkay Gundogan, with Riyad Mahrez, Bernardo Silva and Sterling in a front three ahead of an expected back line.

Mauricio Pochettino, who has been heavily linked with a move to Manchester United following the sacking of Ole Gunnar Solskjaer, started Mbappe, Neymar and Lionel Messi in a front three.

The former Spurs boss said when asked if rumours of his future cost the team: “We know their situation. We are living in a business that rumours are there, sometimes negative, sometimes positive. That is not a thing to talk about – the rumours.”

Guardiola said when asked if he was trained with his changed starting XI: "No, but we know each other quite well, they know what they have to do, they can make adjustments but not much.

"Aleks (Oleksandr Zinchenko) knew he’d play this position and he made good actions and helped us to defend well.

"It was a long time ago since he played in his natural position, I would say he almost never played in this position.

"It was not easy to find the space, the first minutes were uncomfortable but after that he played well."