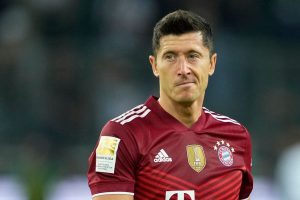 Manchester City were reportedly already considering a move for Robert Lewandowski before Thursday’s bombshell that he wants to seek a new challenge.

The 32-year-old has spent seven years with Bayern Munich after moving to the Allianz Arena from Bundesliga rivals Borussia Dortmund.

During his time with Bayern, the Pole has cemented his status as one of the world’s best strikers, scoring 56 goals for club and country last term.

Lewandowski has started this season in the same vein, scoring Bayern’s goal in a 1-1 draw with Borussia Monchengladbach in their league opener, before adding a brace in the German Super Cup.

But according to Sky Sports News, Lewandowski is now ready to seek a new challenge away from the German champions.

It is stated that he wants to move to another elite club by the age of 35, which puts a two-year clock on such a deal with the striker turning 33 this weekend.

He currently has two years remaining on his current contract and is yet to agree to an extension having grown frustrated with Bayern’s reluctance to sell him.

Though Bayern value him at £100million, City will immediately become interested as they search for a new striker.

While they have mainly been linked with Harry Kane this summer, a pursuit of Lewandowski has also been considered.

The Daily Mail reported in mid-July that the Premier League champions were considering making a move for him after seeing their opening bid for Kane rejected by Tottenham.

It was stated that the fact his contract is entering its final two years could make Lewandowski an “achievable” signing this summer, with Bayern facing the prospect of a cut-price fee next summer.

With Thursday’s bombshell news, it appears that City’s belief that he could be available this year was correct.

The potential £100m would also make him far cheaper than Kane, though there may be concerns over his age.