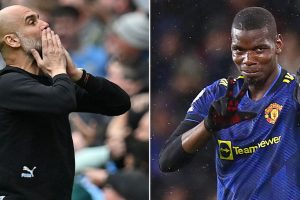 Manchester City are reportedly eager to land Paul Pogba in a “sensational deal” which will see the midfielder join on a free transfer from rivals Manchester United.

Pogba, 29, is out of contract at the end of the next month and is set to leave the Red Devils for the second time. The Frenchman was bought by the Old Trafford side from Juventus in 2016 for a whopping £89million fee which saw him arrive with huge expectations

But his United career has never quite delivered on its potential, leading the playmaker to look for opportunities elsewhere without signing a new deal. And among his potential suitors are reportedly Man City, who are keen to secure Pogba’s talents for free in the summer.

The Daily Mail reports City manager Pep Guardiola wants to add a creative midfielder with versatility at the end of the season. Pogba has been identified as the man to replace long-time stalwart and captain Fernandinho once the Brazilian leaves the club in the summer.

City cannot begin to make a formal offer to Pogba until the end of the season while their overseas rivals have been able to discuss terms since the beginning of the year. Yet City have money on their side, with the Etihad club able to use their financial might to tempt the £290,000-per-week star with both wages and the prospect of titles.

Do you think Paul Pogba will break Man United hearts by joining rivals Man City? Let us know in the comments section.

The Premier League leaders face a challenge in persuading Pogba to switch allegiances in a deal which would shock the red side of Manchester. But the Mail claim the World Cup winner “would not immediately dismiss” them as an option.

Pogba’s transfer to City would undoubtedly cause a major stir as Carlos Tevez’s move did back in 2009, after which he won a Premier League title and an FA Cup. But Guardiola first faces tough opposition from Juventus and Ligue 1 giants Paris Saint-Germain before he lands his summer target.