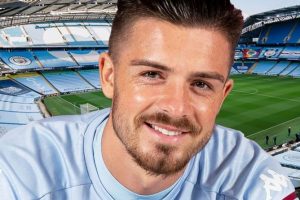 Manchester City have made a bid of £100million to sign Aston Villa captain Jack Grealish, reports claim. The Premier League champions are looking to bolster their forward line and their interest in Grealish has been well documented since the completion of Euro 2020 but now they have made their first move to test Villa’s resolve.

Grealish has been away on holiday in Mykonos and more recently Dubrovnik but now he wants his future resolved ahead of the new season.

Aston Villa are prepared to offer Grealish – who only signed a new deal last summer – a bumper contract extension but the offer is believed to have matched their valuation of their captain.

It means permitting the offer is accepted, any final decision could ultimately rest with Grealish, who is believed to be considering the move to the Etihad Stadium.

The Telegraph have now broken the news of City’s first bid after the clubs started formal negotiations earlier this week.

Villa have always been clear that it would take a mammoth offer for them to consider selling their talisman.

Yet City are prepared to spend big and splash £100m on a player for the first time in their history.

The deal would also smash the Premier League transfer record, currently held by Paul Pogba following his £94.5m move to Manchester United in 2016.

Grealish has previously attracted interest from the likes of Arsenal and Tottenham but has never come close to leaving Villa Park.

Now City look willing to prioritise the signing of Grealish over Harry Kane as Daniel Levy continues to dig his heels into the ground.

Tottenham would require around £160m to sell their star striker and that simply isn’t viable for Man City unless they sell the likes of Riyad Mahrez, Gabriel Jesus or Aymeric Laporte.

Villa have already moved quickly to bring in Emiliano Buendia from Norwich earlier in the window.

It’s understood the Argentine was brought in to play alongside Grealish as opposed to replace him.

However, the acquisition of the former Norwich attacker does stand Villa in better stead if they were to concede defeat and let Grealish leave.

Grealish has already outlined his admiration for City’s Kevin De Bruyne and now he could get the chance to play alongside him at the Etihad.

De Bruyne too has been public in his praise of Grealish and admitted he’s discussed the Villa marvel with his City teammates.

Grealish will now have to weigh up his commitment to his boyhood club amid the lure of working with Pep Guardiola and regularly fighting for the biggest prizes in club football.