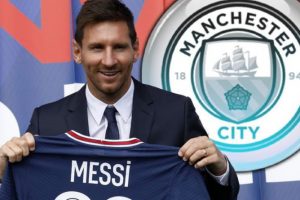 Is Pochettino under huge pressure at PSG after Messi arrival?

Manchester City must feel like the child who unwraps his presents on Christmas morning and is thrilled to find a toy Ferrari only to watch their big brother do the same to reveal a real one.

Jack Grealish’s unveiling on Monday saw a talented creative player with 37 goals and no trophies to his name pledge himself to delivering a first Champions League title for City.

Wednesday saw another talented creative player – only one with 671 goals and 35 trophies behind him – do the same for Paris Saint Germain across the Channel.

Grealish is an exciting signing but he is no Lionel Messi. No-one is.

PSG’s parading of the greatest player of the generation, maybe of all time, is a vanity scheme par excellence for the club’s Qatari owners but one with a defined ambition behind it.

When the emir Tamim bin Hamad Al Thani bought the club a decade ago his twin ambitions were to bring either Messi or Cristiano Ronaldo to his club and to win the Champions League.

With part one achieved, part two looks a lot more likely over the course of Messi’s two-year contract and that has implications for City on their parallel petrochemical-powered path.

City’s lavishly-funded but agonising progression towards European supremacy appeared to have reached its tipping point with defeat to Chelsea in last season’s final.

There were no more learning experiences left to be ticked off. If the status quo around Europe had been maintained they would have been favourites for the Champions League this season.

One signing has changed all that. The captures of Sergio Ramos, Gini Wijnaldum and Italy goalkeeper Gianluigi Donnarumma by PSG were one thing, Messi’s quite another.

His sunny arrival in the French capital following his dark departure from Barcelona a few days prior – a Swiss weather house mood change if ever there was one – brought with it a significant power shift.

Messi completes what is possibly the most lethal front three ever seen in European club football alongside Neymar and Kylian Mbappe. In such company he will be hungry for another nibble at European football’s greatest prize after only gracing one Champions League final in a decade.

The presence of the Argentine genius does not guarantee PSG will lift the trophy in St Petersburg next year or Istanbul in 2022 but the undisciplined bunch City pushed aside at the semi-final stage last season have suddenly become a whole lot more scary.

If City rather than PSG had signed Messi on a free transfer how different the landscape would have looked.

Could they have done so? Pep Guardiola has a strong relationship with Messi from Barcelona and City were all over him when he was wanting to leave the Nou Camp last year. But by the time Messi suddenly became available on this occasion the £100m deal to sign Grealish was all but done. So they pressed on.

Viewed through a long-term lens the investment in Grealish – even for the eye-watering British record transfer fee – may turn out to be the smarter one. Grealish is 25, Messi is 34.

He will improve over the next few years in the City environment whereas Messi’s powers will probably start to wane. But in football the long term does not exist. The short term is everything.

Since Guardiola arrived in 2016, £1bn has been spent in the transfer market by City in an attempt to secure the Champions League trophy.

Two more years as bridesmaids would take Guardiola to the end of his contract and drive City insane with frustration.