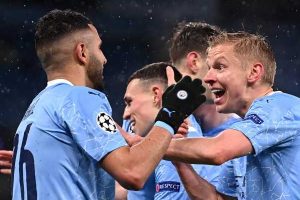 Despite his goalscoring heroics for Manchester City on Tuesday, Riyad Mahrez has insisted his side’s Champions League semi-final victory over Paris Saint-Germain was down to his team-mates in defence.

Mahrez scored once in a 2-1 first-leg win in Paris and netted twice in Manchester as City won 2-0 and booked their spot in the final.

The 4-1 aggregate result ended coach Pep Guardiola’s 10-year wait to return to the final of the competition he regularly describes as the pinnacle of the club game. It also sees City in the showpiece match for the first time.

“You have to be solid and everybody has to be solid defensively and that’s what we did,” Mahrez said at full-time.

“We didn’t concede much and I think that’s why we’re in the final.”

City’s back line ensured that PSG did not manage a single dangerous shot on target, with central defenders John Stones and Ruben Dias both outstanding.

City are famed for their domination of possession and carefully constructed goals, but Mahrez’s two finishes both came after classic counter-attacks.

“It wasn’t the gameplan to counter attack, but they had to come at us and maybe at times we were a bit deeper and we are good on the counter,” Mahrez said.

“That’s how the two goals came about and we are happy.

“It was a very good game. We didn’t start well again – we didn’t have a good first half – but we got the goal and we were more comfortable.

“We played well in second half and we could have scored more.”

PSG winger Angel Di Maria was sent off in the 69th minute after stamping on City captain Fernandinho’s foot.

“They lost their nerve and started to kick us and after the red card it was more comfortable.” Algeria international Mahrez added.

City will face either domestic rivals Chelsea or Real Madrid in the final.

City, who won the Carabao Cup last month, will be crowned Premier League champions if they beat Chelsea in the top flight this weekend.