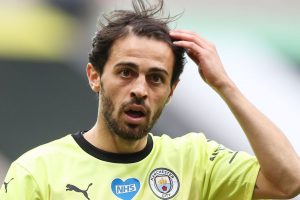 Bernardo Silva has become the third big name to be linked with a summer exit from Manchester City, with the Premier League champions seeking to refresh their squad.

But after being defeated in the Champions League final by Chelsea, Guardiola is believed to be ready to conduct an overhaul of his team.

With several stars reportedly unhappy with their playing time in recent months, that has led many to believe some big names could depart the Etihad Stadium.

Raheem Sterling and Gabriel Jesus were the first two stars to be linked with exits in the aftermath of the loss to Chelsea.

A shock name reportedly set to join those two in departing Guardiola’s side is Bernando Silva, who has emerged as a shock target for several European sides.

Silva has been a regular in the City side since joining from Monaco in 2017, winning three league titles, four EFL Cups and an FA Cup.

The 26-year-old continued to play a key part this season, making 45 appearances in all competitions, scoring five goals and notching nine assists from midfield.

Who should Manchester City buy in the summer transfer window? Comment below.

But despite appearing to be an important player for Guardiola, The Telegraph report that he could be granted a transfer in the upcoming window.

They claim that though he still has four years left on his current contract, the Portuguese international will be allowed to leave if he wants a new challenge.

It is also stated that Silva’s apparent availability has attracted the interest of Champions League clubs in Spain, France and Italy.

One team who would seemingly not be eyeing a move for him though is Barcelona, who now have plentiful options in the position, despite previously showing an interest.

While Silva’s lengthy contract would be a blow to any attempted move at most clubs, that is not the case with City.

The reigning Premier League champions prefer to sell players when they still have multiple years left on their deals, rather than let them run down.

READ MORE: Jack Grealish 'has a preference' over Man City or Man Utd transfer this summer