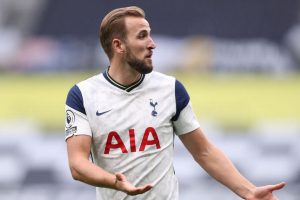 With Manchester City expected to complete the signing of Jack Grealish soon, they could drop a hint on their plans for Tottenham’s Harry Kane.

City and Aston Villa have long been in negotiations for Grealish, and a move deal could be announced this week with many reporting that negotiations between the two clubs and the player are complete.

The England international will also sign a five-year deal until 2026, and it’s his shirt number that could tell plenty about City’s future plans in this window.

It’s long been rumoured that Manchester City are best placed to sign Tottenham’s Harry Kane, with the forward reportedly telling the club he wanted to leave before Euro 2020.

This week, Kane didn’t report to the first day of training, instead, spending time in the United States and Bahamas with his family.

He is expected to report back to training next week after returning and a mandatory five-day quarantine, with new manager Nuno Espirito Santo admitting he hasn’t yet had a chance to speak to the player.

Should City move for Kane, it would break the record set by Grealish as England and the Premier League’s most expensive footballer, with Spurs asking for a fee close to £160m for the forward.

With City signing Grealish, there are questions over what number he will wear on his shirt, as the number 10, previously worn by Sergio Aguero, is now available.

Who should wear the number 10 at Manchester City next season? Let us know in the comments below.

Both Kane and Grealish wear the number 10 at their respective clubs and will want to continue with it next season if they are to join Manchester City.

Should Grealish, the first of the pair to join, get the number 10, it would perhaps indicate that Kane isn’t likely to sign, but if he doesn’t, it may provide a hint to their transfer plans.