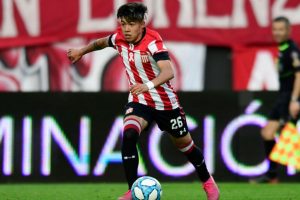 Manchester City have confirmed the signing of 18-year-old Dario Sarmiento from Estudiantes.

City have paid £5.2m for the winger, who has been compared to superstar compatriot Lionel Messi.

Sarmiento will head to the Etihad in the summer having previously represented Argentina at under-16, under-17 and under-20 levels.

He is expected to be sent to one of City's partner clubs on loan, while he waits to receive a work permit.

Manchester City wrote in a club statement: "We can reveal that, upon completion of the transfer agreement signed with Manchester City, Dario Sarmiento will join the English team from July 1 onwards.”

City have one of the best academy set-ups in the Premier League and seem constantly keen to strengthen.

The likes of Phil Foden, Jadon Sancho and Kelechi Iheanacho all spent time in the academy before going on to forge successful professional careers.

“The manager told me, ‘You use your brain well enough anyway. You don’t need your size and don’t need to do anything differently – just carry on playing your football’.

“They looked after me. When you’re young, they only want you to enjoy your football. Then when I was around 14 or 15, I started to focus on getting into the first team.

“Obviously going to train with City made me a fan straight away. I told my dad that I wanted to be a City fan and he replied, ‘OK’, but I could see in his face that he was a bit disappointed. I think he saw it coming, though, once I was training with them.

“He was happy that I’d gone to a club, and especially one as good as City. He’s the main reason I got into football.

“He had football on the TV when I was growing up, then he took me to training every day. Without his desire for wanting me to play the game, I probably wouldn’t be where I am now.”