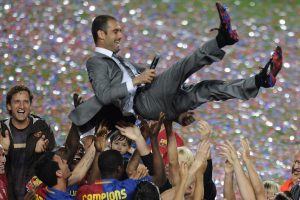 Koeman’s side finished third in LaLiga last season, behind Real Madrid and champions Atletico Madrid, while also losing to Paris Saint-Germain in the Champions League last 16.

They did, however, win the Copa del Rey, beating Athletic Club in the final in Seville.

“Koeman is the ideal coach for next season. I’m very happy and the president [Joan Laporta] is convinced.

“It’s been a tough year for everyone and Ronald deserves another year, with people in the stadium.”

Aguero left Manchester after 10 years at the club, where he became their all-time top scorer. Garcia, meanwhile, returns to Barcelona after four years away in England.

Guardiola thinks both will do well at Barcelona.

“Kun is a goal scorer, with Eric I already told Koeman that he has made a spectacular signing, he’s a jewel, very intelligent. He’ll be one of the captains of the next decade.”

Do you think Aguero and Garcia will do well at Barcelona? Let us know in the comments below.

As is often the case, Guardiola was asked about a return to Barcelona.

The Premier League-winning manager rejected the idea and said he intends to honour his contract at the club as they aim to win the Champions League for the very first time.

Guardiola left Barcelona in 2012 and took a year’s sabbatical.

He then joined Bayern Munich, winning multiple trophies before leaving for Manchester City in 2016, where he has won three Premier League titles.

“I have a two-year contract in Manchester," he continued.

“I’m happy and it will continue to be so.”

Guardiola’s contract at the Etihad Stadium lasts until the end of the 2022-23 season.