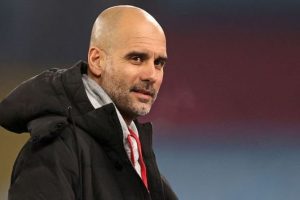 Manchester City manager Pep Guardiola insists he is only focused on beating Manchester United this weekend rather than the prospect of his side breaking records with their current winning run – and talked down his side being champions elect by reiterating that Liverpool still have the crown – after their midweek defeat of Wolves.

City’s relentless winning machine took yet another step towards the title on Tuesday night by overcoming another stiff test at the Etihad against a stubborn Wolves side.

The Citizens enjoyed almost sole ownership of the ball but Leander Dendoncker’s own goal was cancelled out by a Conor Coady header on the hour mark to threaten the end of their perfect streak.

The Premier League leaders took advantage of their continued dominance however through two late Gabriel Jesus strikes to make it 21 consecutive victories across all competitions.

They have won all of their past 15 league matches and matched a club record of going unbeaten in 28 straight league and cup games, the same feat they managed under Guardiola between April and December 2017.

Pacesetters City now lead Manchester United by 15 points although the Red Devils, who they face this Sunday in the derby at the Etihad (4.30pm kick-off), have a game in hand on them, which comes against Crystal Palace on Wednesday night. 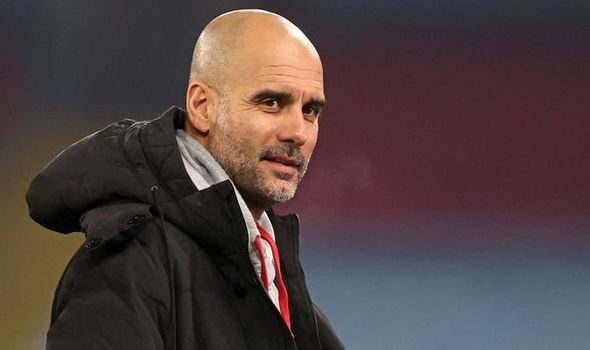 Speaking after the 3-1 win against Wolves, Guardiola was delighted with the performance of his players as they again recovered from a setback to win, just as they did against West Ham at the weekend.

Though he dismissed the idea his side are closing in on the title, Guardiola did admit they are in an ideal position to dethrone rivals Liverpool and claim their third triumph in the past four seasons.

He said: “Fantastic game. We suffered after we conceded the goal with the first shot on target they had.

“It’s so difficult to play against them, they only concede a few and they wait, the speed they have up front, all of their opponents know it.

“But we were fantastic and played really well with our control. After 1-1 we suffered for five minutes but we overcame that situation and created lots of chances in the end. Well deserved.

“The second half we started really well. We created more chances in the first five, 10, 15 minutes. After, we lost two balls when we wanted to attack too quick.

“Sometimes we want to do the situations too quick, we need more passes and the more and more chances we will have. Against this team you open the game, nothing to do.

“It happened for five or 10 minutes but the rest was brilliant.”

Pressed further, he said: “Man United. That’s all we care [about now]. We’re going to care about the records when everything is over. Man United.”

Told their performance showed the signs of champions elect, the Catalan added: “The champions is as I said yesterday in my press conference, Liverpool, the crown belongs to them. 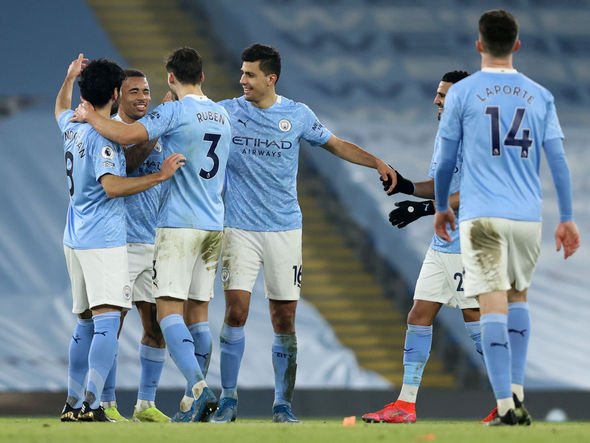 “We are in the best position right now to take them out and we are going to try but they are the champions. We want to win it and next season defend it all season.

“Right now there is 33 points to play [for]. We are 15 points ahead today. Tomorrow our opponents will play, now we have one or two days off, rest everyone especially mentally, because we don’t have much time and prepare for United at home.”

Man of the match Riyad Mahrez told BT Sport: “It was a tough game. We started very, very good and we created chances.

“We could’ve killed the game in the first half – second-half was a bit more difficult but we still created chances and then we finished very good. We kept going and kept pressing.

“Sometimes you can have the ball for 90 per cent of the time and you don’t kill the game. The last 10 minutes were so good. We scored and we finished the game strong and we are very happy.

“We have to play game by game. The next game is Manchester United and we need to stay focused to try and win this game.

“It’s difficult sometimes when we change six or seven players but every player is so good and everybody makes their contributions.”