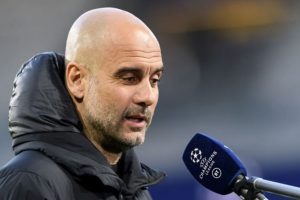 Pep Guardiola remained tight-lipped on the arrival of Cristiano Ronaldo – although conceded that much can happen in the last few days of the window. City have been linked with the Juventus striker in recent days, with a move reportedly getting closer; althouh Guardiola has refused to give any hints about his future.

Speaking to the press ahead of Saturday’s fixture against Arsenal, the Spaniard said:

“I cannot say much. Harry Kane announced he continues at his club, exceptional club like Tottenham.

“Cristiano was at Juventus, I think a Juventus player. Only I can say that in three or four days left in the transfer window everything can happen.

“In my personal view there are few players, Ronaldo and Messi included, that they decide where they are going to play. They are the leading role in the negotiations.

“Right now I’m delighted with the squad we have and we’ll stay the same.”

Pep was quizzed on whether he could manage Ronaldo – especially given the feuds they had in previous years when Guardiola was in the Barcelona dugout against Ronaldo’s Real Madrid in the world-renowned El Classico.

But, having managed Lionel Messi, Guardiola didn’t say no to managing Cristiano – claiming that him and Messi were the best two players to play football over the the last 30 years.

“I say the same, Cristiano will decide where he wants to play, not Man City or myself.

“Right now seems far away, Today is a tough press conference for myself, tomorrow we have a tough game. The conference will be other issues.

“We are incredibly greatful to enjoy the best two players we have seen in the last 30 years. We can only say thank you. They were amazing every single season, what they have done, honestly, I don’t think we’ll watch something similar in the future.”

City’s move for Ronaldo comes after transfer talks broke down in their pursuit of England and Tottenham captain Harry Kane.

Kane was rumoured to have warranted a £150million fee from Spurs before they would sanction his departure – but an astronomical fee such as that was always going to be a tough task, with City eventually backing down.

Guardiola claimed City didn’t even bid once, contrary to reports – with the Spaniard talking about Daniel Levy’s tough negotiating style being a hinderance.

“The moment they open the door maybe it happens. If they wanted £200m we wouldn’t pay it, we don’t have it.

“We tried, but the big master of negotiations Daniel Levy knows everything, we couldn’t do it. Maybe I’d do the same.

“He’s a Tottenham player and I wish him the best in the last years of his career doing well in London.”

Spurs are in the market after Sergio Aguero moved to Barcelona following the end of his brilliant ten-year spell at the Etihad.

And, with Gabriel Jesus as the only senior striker in the side, City are in the market for another – with Ronaldo now on their list after his availability became known.

Ronaldo’s move would be met with envious looks from the red half of Manchester, after playing for Manchester United from 2003 to 2009 – becoming a cult hero in the process.

However, a move could still be done for Ronaldo to go back to Old Trafford, according to reports.