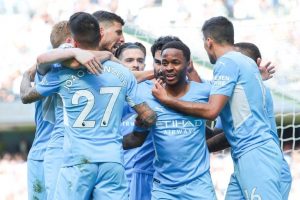 Manchester City took advantage of Liverpool’s slip-up to Tottenham with a 5-0 win over Newcastle to edge ever closer to retaining their Premier League crown. Goals from Raheem Sterling, Aymeric Laporte, Rodri and Phil Foden saw Pep Guardiola’s side move three points clear atop the league’s summit and bounce back from their midweek Champions League heartbreak in style.

Having dramatically capitulated against Real Madrid on Wednesday, Pep Guardiola demanded a response from his side, and that’s exactly what they provided. Sterling opened the scoring with less than 20 minutes on the clock, heading home from close range after Joao Cancelo knocked-down Ilkay Gundogan’s floated ball over the top.

Laporte then doubled City’s advantage seven minutes before the half-time interval, firing home following a scramble after Martin Dubravka spilled Gundogan’s volleyed effort. City’s dominance continued after the break as Rodri added a third with an hour played, heading home Kevin De Bruyne’s corner at the near-post, before Foden added a fourth late on and Sterling completed the rout from close range.

The dominant display saw City not only capitalise on Livepool’s slip-up to open up a three-point gap over the Reds, but also saw them better the goal difference of Jurgen Klopp’s side. Daily Express take a closer look at five things we learned on glorious afternoon for Guardiola’s side.

In the build-up to Sunday’s clash with Newcastle, Guardiola admitted the morale of his players is improving day-by-day, while he reaffirmed it will take time for his squad to recover from their Champions League catastrophe in midweek. City suffered a huge psychological blow in failing to get over the line in the dying minutes against Real Madrid on Wednesday night, leading to question marks over mental strength.

Having capitulated at the Santiago Bernabeu, many wondered whether the manner of the defeat would have a lasting impact on the remainder of City’s season, with Guardiola’s side embroiled in a highly pressurised title race. However, City responded on Sunday to underline their resilience.

Guardiola’s side looked calm and assured as they asserted their authority from the off, eradicating any doubts over whether they would endure a European hangover. Though their spirits may have been lifted by news of Liverpool dropping points to Tottenham on Saturday, City certainly showed their strength of character at the Etihad.

Despite scoring 10 goals in 27 Premier League appearances heading into Sunday’s showdown with Newcastle, Sterling has looked a shadow of his usual self in recent weeks. City’s No.7 hasn’t featured on the scoresheet since his hat-trick against Norwich back at the beginning of February and struggled to stamp his authority of the game when subbed on at the Santiago Bernabeu in midweek.

However, the visit of Newcastle on Sunday would have no doubt provided him with a welcome boost. The Magpies are one of the 27-year-old’s favourite opponents and he soon confirmed that by netting the opener with under 20 minutes on the clock.

Grealish must learn to gamble

Though Grealish showed glimpses of his undoubted ability at the Etihad on Sunday, City’s No.10 still has a lot to learn in order to make the step up to a regular starter under Guardiola and earn the Spaniard’s full trust. Despite demanding the ball throughout the contest with Newcastle, the England international rarely found himself in possession in dangerous areas.

In fact, when it comes to affecting the game and becoming more of a threat, Grealish should look to fellow City forward Sterling for inspiration. Under Guardiola, the latter has established himself as one of the Premier League’s most prolific poachers, often tapping in from close-range having evaded defenders with clever movement and having gambled on arriving at the back-post.

In order to become a more prominent figure in this City side, Grealish must follow suit. The former Aston Villa star missed the opportunity to latch on to some of Joao Cancelo’s fizzed crosses in the early half and his tendency to hang out wide instead of invading the opposition’s area is proving costly. Put simply, Grealish must learn to gamble.

One player who should have counted himself particularly unlucky on Wednesday night was City’s £100million man Grealish. The England star produced an eye-catching cameo at the Santiago Bernabeu and was cruelly prevented from sealing City’s passage through to the Champions League final after being spectacularly denied by both Ferland Mendy and Thibaut Courtois.

Grealish was unfairly blamed for failing to finish the job in some quarters, but in truth, he could have done little more with his two crucial chances in the dying moments of normal time in Madrid. The 26-year-old was further thrust into the limelight after an old tweet showing his support for the Spanish side surfaced and subsequently went viral.

Given the scrutiny Grealish has found himself under this week, the creative midfielder could have been forgiven for approaching the Newcastle clash with caution, however that didn’t prove to be the case. The City winger demanded the ball in the early stages and attempted several audacious flicks, emphasising just how much belief he has in his own ability and highlighting the extent of his resilience after a testing few days.

The extent of the challenge facing Newcastle

Shortly after completing their mega-money takeover of Newcastle, the club’s new owners expressed their intentions of aiming to emulate City’s cash-fuelled charge to the top of the game. However, Sunday highlighted just how much of a challenge that will be.

The Magpies have looked rejuvenated under Howe in recent months and have subsequently staved off the threat of relegation. Should they finish in mid-table come the end of the current campaign, they would match City’s feat from the first season under their respective ownership back in 2008-09.

However, the Etihad encounter on Sunday would have been an unwelcome reality check. In the early stages of the second half, City possessed a staggering 99% of play having completed a 108 passes to Newcastle’s zero. While the Magpies have been much improved in recent months and look a far more competitive outfit these days – aided by their January additions – a monumental task awaits if they are to truly eclipse City’s success.