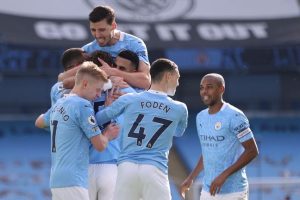 Report as Dias and Stones score either side of Michail Antonio’s equaliser; City are also now 27 unbeaten in all competitions, and lead Man Utd and Leicester by 13 points, having played a game more; West Ham, fourth, can be overtaken by Chelsea if Blues win on Super Sunday Centre-backs Ruben Dias and John Stones were the unlikely scorers as Manchester City made it 20 straight wins with a 2-1 victory over West Ham at the Etihad Stadium.

Sergio Aguero started his first game since October but struggled to make an impact, and it was Dias’ fellow defender John Stones who regained City’s lead with a striker’s finish from Riyad Mahrez’s centre (68).

Dias and Stones have now scored five goals and only conceded three in the 16 games they have started together this season, helping City stretch their winning run in the Premier League to 14, and their unbeaten run to 18.

Pep Guardiola’s side are also now 27 unbeaten in all competitions, and lead Manchester United and Leicester by 13 points, having played a game more. West Ham stay fourth, but will be overtaken by Chelsea on Sunday if the Blues beat Manchester United.

Man of the match: Ruben Dias

The two form teams in 2021 started tentatively at the Etihad, with City failing to register a shot on goal until their 30th-minute opener.

It came from a piece of brilliance from De Bruyne, delivering a beauty with his weaker left foot from the right flank, perfect for Dias to head past Darren Randolph from close range after both he and John Stones had stayed high up the pitch from a corner. No player has more assists than De Bruyne this Premier League season, level with Harry Kane on 11.

City’s passing got sloppy thereafter as an organised West Ham looked to pounce, and they were given their chance just before half-time. After Aguero lost the ball in his own half, Lingard fed Pablo Fornals, who found Vladimir Coufal free on the right of the box, and his centre was pulled across goal by Lingard, only for Antonio to tap home at the far post from close range.

It was the first goal City had conceded in the Premier League at home since December 15, a shut-out lasting 587 minutes.

Aguero lasted barely an hour, brought off for Gabriel Jesus, but after West Ham had frustrated the leaders, it was another centre-back on the scoresheet midway through the second half. After Mahrez had twisted and turned on the right, his low pass was swept home superbly by Stones 10 yards out for his fourth goal in 2021 in all competitions, more than any Premier League defender.

Up until stoppage time, West Ham had mustered just one attempt in the second half, before Issa Diop headed wide in the final minute unmarked.

But it ended 2-1 as City’s centre-backs took centre stage again, this time at the other end, as they gallop towards a third title in four years. West Ham, stubborn and organised throughout, will take heart from their performance going into difficult games against Leeds, Manchester United and Arsenal in their quest for an unlikely top-four finish.

West Ham’s next game comes against Leeds on Monday Night Football on March 8, live on Sky Sports at 8pm.