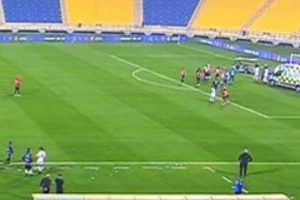 Al Wakrah star and Mali defender Ousmane Coulibaly suffered a heart attack during a domestic match in Qatar on Saturday.

The 16-cap international was playing for Al Wakrah against Al Rayyan in the QNB Stars League when the horrifying incident occurred.

Coulibaly, who has had spells in Europe with Brest, Guingamp, Platanias and Panathinaikos, collapsed late in the first half.

As cameras panned to the 32-year-old in distress on the goalline, panicked medics sprinted their way towards the stricken ace.

Once the severity of the issue became apparent, the match was abandoned and given as a 1-0 win for Al Rayyan, who were ahead at the time. Later on, a statement released by the league confirmed Coulibaly had indeed suffered a heart attack.

"During the QNB Stars League match between Al Rayyan and Al Wakrah on Saturday, Ousmane Coulibaly suffered a heart attack which required the intervention of medical and ambulance staff present at the venue," a short statement read.

"It may be noted that the player is currently receiving necessary medical care and attention.

"The Qatar Stars League wishes the player a fast recovery, and we would like to thank the medical staff of both teams, paramedics and doctors for their great efforts during such events. "Regarding the status of the match, it was agreed to end it and complete the remaining time later starting with the score when it was stopped (1-0 in favour of Al Rayyan)."

While someone else added: "Wishing Ousmane Coulibaly a speedy recovery, Ousmane collapsed during a game in the Qatar Stars League."

Coulibaly is the latest footballer to suffer from cardiac and heart problems on the pitch. Just a few months after Eriksen's horrifying ordeal, Manchester City legend Sergio Aguero announced his retirement from the game after being diagnosed with a Cardiac Arrhythmia.

Wyke, formerly of Sunderland and Bradford City, was taken to Wigan Infirmary and then Liverpool Heart and Chest Hospital, where he was fitted with an implantable defibrillator for protection while he recovers.