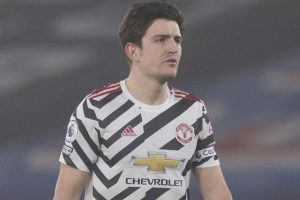 A furious Harry Maguire could be heard losing his cool with Marcus Rashford during Manchester United’s 0-0 draw away at Crystal Palace on Wednesday night.

United were held to their third consecutive goalless draw in all competitions at Selhurst Park, failing to break down a resilient Palace side and missing the chance to move three points clear of Leicester following the Foxes’ own 1-1 draw at Burnley earlier in the evening.

Ole Gunnar Solskjaer’s men didn’t really come close to opening the scoring in south east London, with the likes of Rashford, Edinson Cavani and Bruno Fernandes not at their best in attack. Maguire was left fuming with Rashford during the stalemate and could be heard launching an expletive order to his team-mate as they chased a late winner.

Reports suggest the United captain bellowed “f****** stay onside” to Rashford after he was flagged for offside late on, marking his frustration with their sluggish performance on the night. Solskjaer felt his side’s sloppy passing was to blame for their third 0-0 on the bounce, admitting they never got going in the second half.

He told Sky Sports: ”It's disappointing. We were just a little bit off. If you’re not spot on you won’t win games. Palace always make it hard for you.

"In the second half we never got going.

"Sometimes it’s human nature, sometimes you don’t work at your best. Today we didn’t. It’s been a long season – I'm not blaming that because everyone has the same season. You’re playing against a good team who make you play the way they want to. "We kept giving the ball away. There were times in the first half we built some pressure, had some half decent chnces but kept giving it away. Then you don’t build momentum and that’s the game you get."

Next up for United is the small matter of a trip to Manchester City on Sunday afternoon.