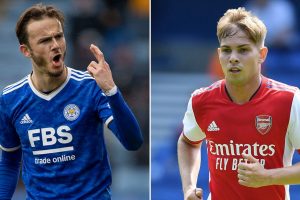 Arsenal have confirmed that Emile Smith Rowe will become the latest player to wear the coveted No.10 after he finally agreed to a new contract.

The 20-year-old had been heavily linked with a move to Aston Villa, with the Midlands club launching two unsuccessful bids.

But Mikel Arteta made Smith Rowe negotiations a priority and has challenged the Hale End graduate to become even more important within his young Gunners squad.

"As we all saw last season, Emile is an intelligent player with excellent ability," said Arteta.

"His sharpness on the turn and exceptional vision have already made him a key player for us. His attitude and willingness to learn have also been very impressive.

"We're now looking forward to helping him develop further and seeing him become even more important to the strong young team we're building."

The fact he has taken the number vacated by Mesut Ozil hints that Arteta sees Smith Rowe as the long-term option in the number ten role.

Martin Odegaard played in that position for much of the second half of the season, but with the Norwegian returning to Real Madrid, Smith Rowe could be given an extended chance.

Arsenal have also been linked with Leicester City star James Maddison in recent weeks, with Arteta busily going about revamping the playing staff at the Emirates.

The Foxes are holding out for £50million for the 24-year-old and it’s likely the Gunners would need to sell before they buy.

There has also been the assumption that following Smith Rowe’s new contract, a move for Maddison was no longer a priority.

However, the player himself believes that his best position is actually as a deeper lying midfielder, meaning he could be Thomas Partey’s partner in the centre of the park.

Maddison registered 11 goals and 10 assists last season, but he thinks his game has transitioned since Brendan Rodgers took over at the King Power.

“Number eight definitely,” Maddison told LeicestershireLive last year. “I played as a number 10 at the start of last season, and then when the gaffer [Rodgers] came in, I transitioned into a number eight, and sometimes I play off the left.

“It’s that awareness and that responsibility of getting little toes in, little interceptions, because as a number eight you find yourself deeper a lot, so I’ve had to add that.”

Maddison’s arrival could solve one of Arsenal’s biggest problems, while allowing Smith Rowe to truly make the number ten role his own.

Do you want an exclusive pre-season preview of YOUR club – both in your inbox and through your letterbox? Head over here to find out more and secure your copy .