For Jamie Maclaren, it's all about retribution and revenge, righting a cup final wrong and giving Melbourne City their second piece of silverware. 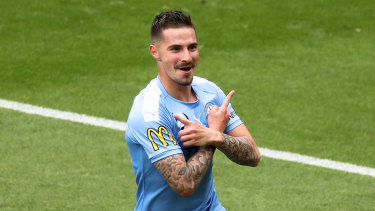 Jamie Maclaren has been in fine form.Credit:AAP

As he and his teammates prepare to take on the Reds at Coopers Stadium on Wednesday night in the final of a trophy City won in 2016, Maclaren's mind can't help but drift back to the inaugural decider, back in 2014.

A then youthful Maclaren was a Perth Glory forward who started on the bench in that final at Coopers Stadium. The Reds had taken a 67th-minute lead through Sergio Cirio and Maclaren was thrown into the fray with 12 minutes remaining to try and get an equaliser, to no avail.

Adelaide won that first Cup final 1-0, and they have been the most successful club in the competition's short history, winning the 2018 version 2-1 over Sydney in Adelaide and reaching the final in 2017, when they lost to Sydney after extra time.

Adelaide also ended City's A-League finals campaign last season, eliminating the Victorian team with a goal in the final minute of extra time as a penalty shootout loomed, so Maclaren has good reason to want revenge.

"I have been on the losing end of a cup final, it was away in Adelaide, so this is a bit of redemption for me," Maclaren says. "The boys are just going to go gung-ho. We got knocked out by them in the finals series last year, but that's in the back of our mind, we just go out there and play our game.

"This club has won it before and I want to bring another trophy to this club."

Even though the starting XI for both sides will almost certainly be completely different, Maclaren was adamant that City's win in their round two A-League match was hugely significant in the build-up to the tie.

"It's huge, it helps if you are playing the same opponent. We will go there and they will know the last time we played them we beat them.

"It will be a mental battle, but cup finals, they are a whole new mindset going into it.

"When you are in this rich vein of form you do enjoy the moments. I have to keep getting into these type of positions because my teammates, whether it's with the Socceroos or here at Melbourne City, will create chances for me and I always have to be the man who keeps on his toes.

"My second goal [against Adelaide on Sunday] fell to me in the six yard box, I knew the boys were going to compete, but it's no coincidence it falls to me."

Maclaren was grateful there was no international action in the offseason this year as it allowed him to get his body in shape.

"The last two years I have had the Confederations Cup and the World Cup. They took a toll on me in terms of not being able to have a full pre-season.

"I was able to get six weeks off and really sort my back out because it was an issue last year."

Adelaide were several players down through sickness and injury on Sunday and could possibly be missing several first team players again. Dutch coach Gertjan Verbeek will be sweating on the fitness of former Socceroo Ben Halloran, who withdrew through sickness before the loss to City on the weekend.

City's veteran French boss Erick Mombaerts doesn't feel as though he is under any pressure to deliver a trophy so soon in his reign.

"I have big experience now, I am getting old, I have no pressure, I am enjoying being here and also to have the chance to win a trophy. It's a final, it's away, and it's a good challenge for us."